The BEST country houses to rent at Barcelona

We have an average score of 9/10! See what they think of our properties in Barcelona

Hosted at Ca La Siona
We were last May bridge at Ca La Siona and it has been fabulous, the house is very spacious and spacious and even more so for us who were only three people, a palace. Upon arrival you have the feeling of being in a luxury home. You can see that the walls have been designed and painted with a lot of love, with colors very consistent with the whole of the house that give the room a very warm atmosphere, the living-dining room is really well decorated with some illustrious wooden furniture, the kitchen is quite spacious and it also has a small table for lunch, each and every room is large and well decorated, combining the spaces really well, there are countless details such as the arch at the head of the bed in the master bedroom, a different bunk from the ones we had seen before in the three-person room, details such as an old sewing machine, the painted border on certain walls, the brickwork around the door frames, the floors with a nice porcelain, is fully equipped for this type of tourism and is very clean and cared for with great care.
D
Diego
5/5 dec-2022

Hosted at La Sala El Permanyer
We have rented the house for 4 couples, 3 singles and 3 babies. Of the multiple options we had, we decided to rent the big house, it has 2 floors with 3 large double rooms (where the cots for babies fit perfectly) and 2 double bedrooms, all of them decorated very well and facing the outside area. In all there is a bathroom which has made it very comfortable. The kitchen has a large table where we could all fit at lunchtime. It has a very cool porch with a round table with a very extensive garden area full of trees and grass where the children have been able to play and roam freely being controlled at all times.
A
Aroa
5/5 dec-2022

Hosted at Casa El Permanyer
They have been some incredible days, everything I read in the opinions is true, I cannot write anything to improve it. Genoveva is very attentive to her clients (to the best of her ability). I go a lot to rural houses and the hostess really deserves a special mention for her treatment. The perfect house, the ideal walking environment, calm ...
L
LE
5/5 dec-2022

Hosted at La Sala El Permanyer
It is truly incredible accommodation for its facilities. It has a very nice little garden with a table to have lunch in the shade of a tree and a small swimming pool between arizónicas next to the barbecue. The environment is very natural and rustic. The owners willing and in the end you have a great feeling of having invested bein the money of your vacation.
E
Ernesto
5/5 nov-2022

Hosted at Arianella B&B
We are a couple who stayed in the house last Friday and we were delighted, both with the house and with the owners, Rainer, Ariane, and the two little ones, what cute they are!, Who did everything possible to make us like in home and they informed us of what we could visit. The accommodation is very tastefully decorated, the room was huge and well equipped.
T
Tomás
5/5 nov-2022

This is a province that needs no introduction, a capital in terms of its culture both in Spain and Europe. Barcelona is a unique destination where you can get lost and enjoy of al the possibilities it offers. Its beautiful beaches will make for a great day to spend on the beach.

You mustn't forget about its many museums, such as the Picasso, or the Miró museums. Walking the Ramblas up and down, or Plaza de Cataluña on your way to visiting its monuments, such as the iconic Sagrada Familia, will allow you to discover one of the most impressive areas of the province. We can't decide between the many UNESCO world heritage sites you will find here, such as the famous Parc Güell.

Barcelona, where they usually enjoy of temperate soft winters, and hot summers, is a city of many cultures which resulted in its particular cosmopolitan personality, that inspired artists like Gaudí, filling the capital with its unique, and distinctive, personality.

Another of its highlites is its gastronomy, where garden and farm are are met in a perfect combination, resulting in traditional dishes such as butifarra amb mongetes, or escudella. And for dessert, of course, crema catalana.

What to see in Barcelona?

Discover the mysteries that await for you in each corner of this province. If there's something special about Barcelona is its particular magic, and we invite you to see it for yourself. This is a territory between the Pyrenees and the views of the Mediterranean sea. A region with more than 100 km of shore that never sleep. A province full of leisure, culture and history. A truly cosmopolitan region, it welcomes thousands of tourists every year, making them feel at home as they stroll along the Ramblas.

This province is also home of a well-known and varied gastronomy, of local and foreign dishes. If you want to travel to one of Spain's top destinations, do not waste another second to choose Barcelona in your map.

What curiosities are there in Barcelona?

If you're already packed and ready to travel to Barcelona, you should know you are not the only one, as Barcelona is home to more tourists than locals, reaching the impressive number of 9 millions of visitors each year. But many public figures and some of the greatests artists have made of Barcelona their temporary home too.

In its capital not only lived the famous poet Federico García Lorca, but was also the scenery of one of the most important chapters of Spanish literature: it is where Don Quixote's last battle took place, and you can visit the house where Cervantes also lived for a while, still intact, in Paseo Colón.

As you can see, each step you take in this province is a step closer to discovering one of its local legends, mysteries, or curiosities that this province offers, and making your trip a far more interesting and enriching experience. Barcelona is full of surprises. 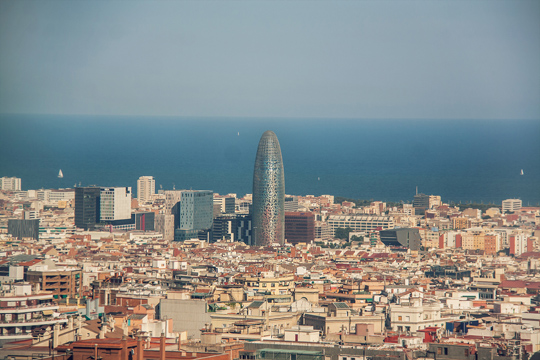 Where to stay in Barcelona?

Do you know already when you will be traveling to Barcelona? Great. Now you only need to choose where you will be staying.

We have already mentioned that Barcelona is a destination with a great number of visitors each year, and this is the reason why we always recommend starting your search for accommodation ahead of time, so that you can find an accommodation that meets as much as possible your requirements without spending too much either.

The first thing to take into account is that the capital and coast are the most expensive to find accommodation, this is the reason why you can save some money if you don't mind staying a little bit further away from them. Rupit and Prüit is a destination that you'll love. You will feel as if you were entering a film set in the Middle-Ages, since its historical centre has preserved its essence perfectly. In Vic, one of the more popular areas in the province, has also one of the most impressive historical complexes of cultural value.

Mura is an inland town that we are sure you will love. It has its own charming environment, as it's surrounded by nature, and the views are spectacular, perfect for nature lovers.

And you can find the opposite of Mura in the town of Sitges, one of the top sea destinations, with a very busy nightlife. 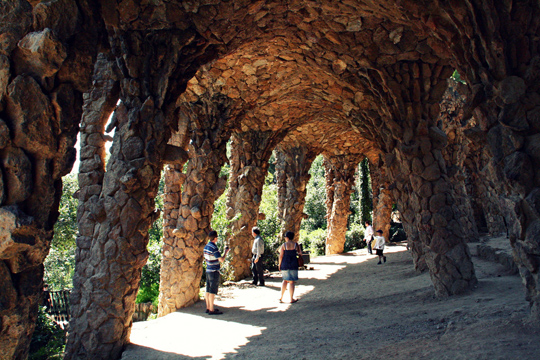 What to do in Barcelona?

The tourist offer in this province is great in number and variety, which is why we know it's difficult to choose only a few of them, given that there is so much to do and see in this area.

If you're interested in exploring nature, you are in the right place for it since this province is surrounded by mountains and natural reserves, such as Monsterrat, or el Cadí Moixerò, or the Montseny amongst others, which are perfect for hiking expeditions that will allow you to witness the great beauty of this region.

But if you prefer to visit the capital, the Sagrada Familia, the Casa Milà or the Parc Güell, are famous examples of Barcelona's iconic and famous avant-garde architecture, that decorates the city.

Away from the hassle of the city, visiting the cathedral in the city of Vic, or the Sau reservoir, are very good options.

The Muntanya de Sal in Cardona is a very impressive natural salt rock formation that is more than 65 million years old.

Last but not least, Vilafranca del Penedés, and Sant Sadurní d'Anoia are two destinations that we also recommend stopping by, if you can. 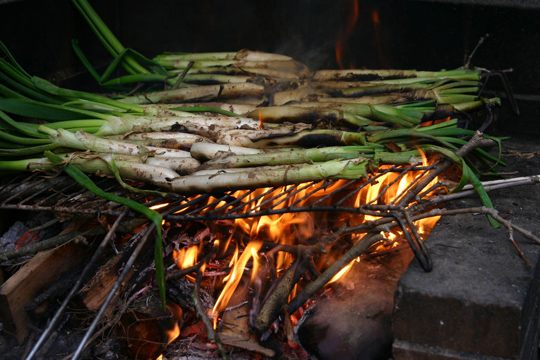 What to eat in Barcelona?

The rich, catalan gastronomy, is a delight for all tourists, who are interested in finding and getting deep into the traditional cuisine of this region.

This region has also made itself, in the last decades, a name for its reputed culinary exponents, and michelin star restaurants, that have become yet another attraction for tourism.

Even though it has a very distinctive character, the gastronomy of of this area has received during many decades the influence of neighbour countries of Spain such as France and Italy, creating the most delicious culinary combinations.

Some of the typical dishes you will be able to try here are calçots (a variant of green onion eaten with a special sauce), escalivada, or esqueixada, a cod and vegetable, cold salad. And let's not forget about pa amb tomàquet, an essential part of the catalan diet. Other traditional local delights include the typical catalan bread, pan de Payés, like the San Jorge one, or Coca de Montserrat.

Special mention needs to be made of the local beverages, with the famous cava as the crown jewel of any catalan celebration. 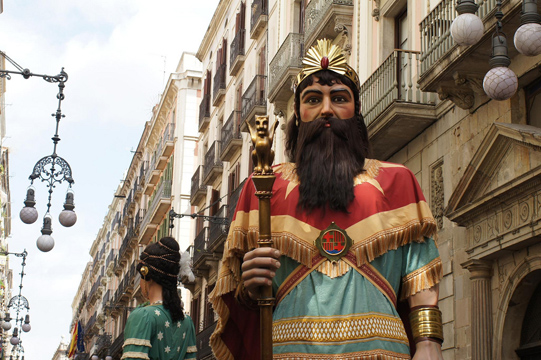 Where are the Barcelona festivities?

There are several chosen dates in any catalan calendar every year, dates to celebrate, with the right atmosphere that you will also be able to enjoy during your stay.

Starting with the perhaps the most popular of them, the Festes de la Mercè which have been celebrated since 1871, are the biggest event celebrated by the locals of Barcelona.

Next comes the Castanyada, an special occasion to spend eating some of the seasonal products, and that is celebrated almost everywhere in the province in November. The Carnival in Sitges is also one of the most popular festivities in the area, filling the streets of this town in the coast with colours, lively music and dancing and, most importantly, lots of fun.

Another local festivity that we strongly recommend checking out is that of San Mateo, celebrated in several towns and cities in the province.

How much does it cost to rent a rural house in Barcelona?

What type of housing do travelers usually prefer to sleep in Barcelona?

When are reservations made in Barcelona?