The BEST country houses to rent at Tarragona

We have an average score of 9/10! See what they think of our properties in Tarragona

Hosted at Casa Rural Eucaliptus
A very complete house in all aspects with the detail of having the Jacuzzi at the doors of the dining room that allows you to take a bath even if the weather is not good. Also the tranquility that is breathed without any type of noise, just listening to the birds singing. Ideal if you want to get out of the city without spending too much time traveling. My 2 children have also enjoyed it a lot, the oldest with 2 years running all day through the large area of ​​the house and bathing in the hydromassage and my youngest son with 7 months breathing fresh air from his seesaw.
J
Jenifer
5/5 dec-2022

Hosted at Casa Rural Eucaliptus
I can not think of a single word to define my opinion about this rural house and that is that its owners have been in charge of improving something that seemed unbeatable, locating in its immense garden a spa in which despite the cool weather typical of these dates of April we have spent many moments of relaxation with views of the mountain, in its warm waters. For the house I have no words, very cozy and does not lack detail, located in a very quiet place where you only breathe peace.
M
Maider
5/5 dec-2022

Hosted at Caseta Morritos
On November 13 at 10:30 p.m., we arrived at the town of La Cava, Joana picked us up, along with her son, and took us to the house. Once in the accommodation, Joana gave us all kinds of explanations of the area, and surprise her son had come early in the afternoon and had lit the fire on the ground, a very important point when choosing the tourist rental housing . It was already lit with its trunk burning and hungry for a village house, once the 3 couples without children were left alone, we disconnected and got to work, better said at the table, we brought good wines and ham, cheeses, patés, and other sausages with toasted bread in the fireplace, tomato, oil, and I don't want to tell you more, imagination, after savoring this dinner with a good glass of wine in hand, sitting in front of the fire, we count our little battles, laughs and shared emotions. The next day visit the Ebro Delta.
A
Alejandra
5/5 nov-2022

This maritime province, a land of wine cellars par excellence, is located in the North of the Iberian Peninsula, and it has some of the greatest beaches in Spain, where you will be able to enjoy of the most splendid summers in the so famous Costa Dorada, or explore it during its mild winters. Although you will also find here a place of spectacular and very different flora and fauna open to be explored and discovered by visitors. We recommend you choose to do rural tourism in Tarragona since it is an option that combines sea, beaches and history alike.

Experiencing the Costa Dorada will surely be something that time won't erase, like it hasn't erased the history behind the ancient Roman amphitheater, city walls, and circus, traces of the life and nature still alive in this region. You will also find here the monastery of Poblet, a UNESCO world heritage site of immense cultural value.

And its natural spaces do not fall short either, and we are not only talking about its beaches. The natural park of Els Ports and the one of Priorat, with the mountain of Montsant as the main focus of attention, make this an ideal destination for an unforgettable escape to nature.

The local gastronomy is known for making visitors wear a bib, unless you don't mind covering yourself in the 'romesco' sauce that you dip in the delicious 'calçots', and many other grilled meals.

What to see in Tarragona?

This province located in the south of Cataluña is home to an immense heritage that you can enjoy discovering and learning about.

It has some great views where you will find the key elements for a perfect touristic experience such as the beaches, culture, monuments, places of interest and gastronomy.

The beaches of this region correspond to what is known as the Costa Dorada, a great place to enjoy swimming in the waters of the Mediterranean sea. It is also a province of great historical importance, where you will find many traces of the Roman civilization that inhabited this whole region.

And if you would like to enjoy doing some active tourism, you can do so in the different natural reserves scattered all over this area, as well as enjoy of some exceptional views.

What curiosities are there in Tarragona?

This province is divided into ten, smaller regions or 'comarcas' with a total of 180 municipalities where you will be able to discover the essence of the ancient Tarraco.

It is a province where tourism is very much alive, and where you will discover the great cultural scene fit for everyone and everyone's liking. It is in the city where most of the tourist activity is developed, but we definitely recommend visiting the rest of the province and inland towns and villages around it, full of magic and great views.

One of the favourite destinations for families, that is also one of the most popular amusement parks in Spain, Port Aventura. With so many options, it will be impossible for you to to get bored.

And you will be able to enjoy of all the above since the weather here consists in mild temperatures during winter, and hot summers that are just the perfect weather to go to the beach. 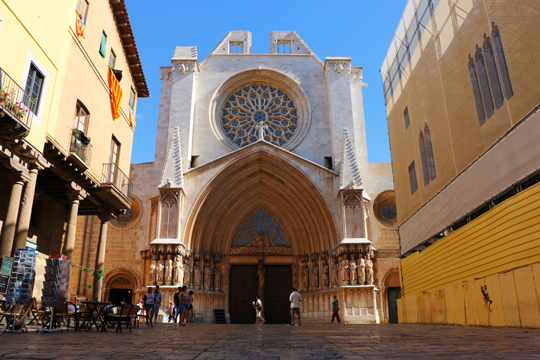 Where to stay in Tarragona?

Tarragona has a very wide tourist offer due to the ever-growing presence of tourism in the capital and coastal destinations, where the number of hotels has increased. If you already know when you will be visiting this province, and you decide to come during summer season, you must know that you will doing so when accommodation in this province is in the highest demand, which means you will have to start looking for accommodation long in advance. On the other hand, and highly recommended, is the option of doing rural tourism, which will be in charge of making you enjoy and discover the potential of some other lesser, but very charming destinations. Amongst the most popular destinations is Miravet, a small town near the banks of the river Ebro, towards which many houses in its historical center are facing, looking almost as if they were about to fall into the river, and creating a very impressive picture.

Santes Creus is also a small town surrounded by vineyards, green, natural spaces and some great views that paint a striking contrast with the historical buildings, such as the spectacular Gothic cloister, and the rose window, watching from above. Escaladei is also a true gem. It can only be visited by 44 people at a time and who will have the privilege of witnessing the beauty of its surroundings, where the first Carthusian order of monks settled in the Iberian Peninsula. And the views? Simply spectacular, with the mountain of Montsant right next to it. 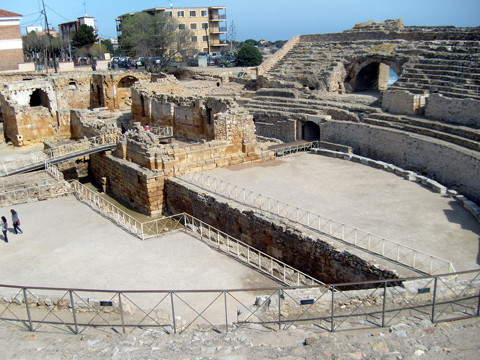 What to do in Tarragona?

This province has a true essence worth discovering. Walking around Tarragona means exploring its more than 2,000 years of history that are manifested in the heritage that has survived history, and is still standing nowadays.

To learn about each of the elements that form this province, the Ruta del Císter is one of the best options with which you will also be able to enjoy of the views of the monasteries, and typical, important buildings in the background.

And if there is a visit you cannot miss, is the one you will do travelling to the past when you cross the gates of the Roman amphitheatre from the 2nd century and, the Romanesque church from the 12th century next to it. Other visits that we recommend and which will offer you a taste of the culture and history of this region are the Roman tower and circus, dating from the 1st century, which are all of them UNESCO world heritage sites.

The cathedral is another must if you are in the capital and, if you are tired, there is nothing like laying down and relaxing for a while in any of its beaches, or going to the Mercado Central for a refreshing appetizer.

Amongst the most recommended natural spots is La Fontcalda, a true eye-catching sight. 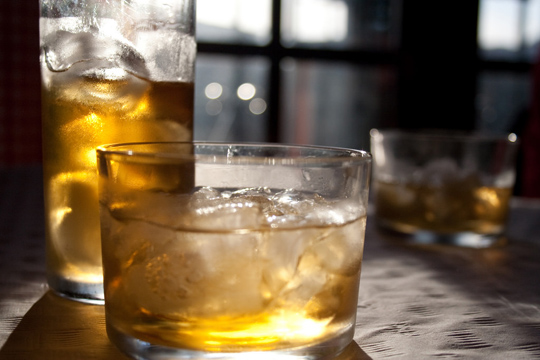 What to eat in Tarragona?

The gastronomy of this province is the result of the influence of several civilizations which have inhabited this region throughout the centuries, and that have also left traces of it.

Considering it is one of the harbours in the Mediterranean sea, and the biggest one in Cataluña, fish here is an important and essential part of the local cuisine.

This product is usually served as a main dish, and prepared with the local vegetables, which make this a unique and very characteristic gastronomy, of many flavours and smells that will remind you of their origin. Amongst the fish, the local blue fish is here has proudly attained PDO status.

'Cazuela de romesco' is, without question, the most popular dish of the gastronomy of Tarragona, although there are many other different and varied ones, such as 'paella marinera', or 'fideus rossejats'.

Nevertheless, from the fields you will also find local varieties of nuts, such as hazelnuts, that you might find decorating some dishes, and adding an extra kick to their flavour. Special mention needs to be made of 'mistela' and PDO wines of this region, also known as 'vino rancio', very popular in the province. 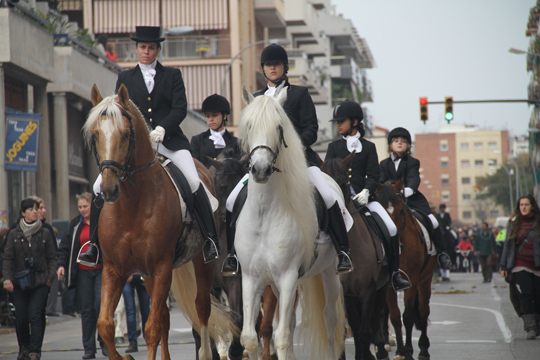 Where are the Tarragona festivities?

Amongst the most popular local festivities in the province, the majority of them are closely connected to the past of this region which means that they will allow you to discover its history in depth.

If you decide to visit Tarragona during any festive season, you will have the perfect chance to enjoy of the true essence of this region, and learn more about its culture.

As always, the start of the year is marked by the celebration of carnivals, which are an important event in this area, celebrated everywhere in its own, particular and special way. It is usually held between the 18th and the 28th of February, and it is also one of the most popular festivities amongst tourists in Cataluña.

Els Tres Tombs is also another important festivities here, celebrated the 26th of March, where many passacaglias or 'pasacalles', horses and carriages fill the streets with music and colour.

On the other hand, Easter week in April is also an important occasion in this province, where street processions and religious services are performed during the whole week in the whole region.

Tarraco Viva is perhaps one of the most famous festival held in this region, celebrated from the 15 to the 28 of May, you will be able to witness some of the most accurate representations and performances of the Roman lifestyle, culture, literature and tradition.

How much does it cost to rent a rural house in Tarragona?

What type of housing do travelers usually prefer to sleep in Tarragona?

When are reservations made in Tarragona?