The BEST country houses to rent at Gran Canaria

We have an average score of 9/10! See what they think of our properties in Gran Canaria

Hosted at Casa Rural Santana Segura
We are a couple and we have spent some very pleasant days with our pets in Tejeda. In this Rural house we have rested very well, it is beautiful in decoration, a very comfortable bed, a very useful bathroom, very well equipped. The breakfasts that Alicia made us are fantastic, very abundant and delicious, with their delicious Homemade Tomato jam and more. We also had a kitchen for ourselves, which was also very well equipped and a very large patio with a table, where we had breakfast , and with its loungers, all quite intimate.
B
Braulio
5/5 dec-2022

Hosted at Las Caldereras
We have loved the kindness and good treatment of its owners. From the house there are good views and an astonishing tranquility is breathed. The perfect equipment, we didn't need anything. We were also touring the nearby towns of El Palmar, Los Castillos, San José del Álamo and Los Portales. We also visit the Special Natural Reserve of Azuaje.
N
Nerea
5/5 dec-2022

Hosted at Casa Rural Santana Segura
We are a couple who went to this wonderful rural house, with our pet Ela and a canary that we were taking care of. The fully equipped and tastefully decorated vacation rental home. It is a very cozy house in every way: the very comfortable bed, fully equipped kitchen, a computer, television, radio, a barbecue that took away your hiccups, a very cozy patio, the spectacular breakfasts that also serve you in a very professional way. the desired time.
S
Steve
5/5 dec-2022

Hosted at Casa Rural Ca' Chispita
The accommodation is very beautiful, it keeps the aesthetics of the island and since you arrive you can breathe the Canarian atmosphere. The environment for those who like the countryside is spectacular. There are several paths and routes for walks or hiking. The inside of the house is very well cared for and the owners have taken care of all kinds of utensils. We want to go back for Easter.
E
Erico
5/5 nov-2022

Hosted at Casa Rural Ca' Chispita
I recommend to everyone, if you have the opportunity, stay at Ca'Chispita. We were completely in love with the tourist rental house and delighted with the attention that its owner gave us. It is a very quiet place and the house is immaculate. It is worth going to rest and enjoy a few days of relaxation. It is one of the best houses I have stayed in on the islands.
A
Angélica
5/5 nov-2022

Everyone who comes to this island always feels as if having landed on another planet, and not only because of is warm weather.

The dunes, and volcanic landscape will take you far away, and make you feel like being in another planet. We are talking about Tejeda, a town that you need to add to your list of places to visit.

Its shores with Maspalomas as its more iconic landmark, will add some peace and tranquility to your trip.

But Gran Canaria has much more to offer, since you will also find here archaeological sites, such as the Cueva Pintada, an archaeological complex which has left us some hints about how prehistoric communities lived in this region hundreds of centuries ago.

From the local gastronomy we would to recuperate some of the most traditional recipes for you, featuring unique products such as 'queso de flor', the local cheese from the Canarias par excellence. And you mustn't leave without trying the local, yam delicacies, a unique gastronomic experience.

For this reason, if you are coming for rural tourism in Gran Canaria, grab your camera and don't lose any details of all the accommodation that we recommend if you are staying in this island.

What to see in Gran Canaria?

This island facing the west coast of Africa, and at the very center of the Atlantic Ocean, will fascinate you with the singular, beauty of its natural, postcard-like landscapes. This island is, together with Santa Cruz de Tenerife, the capital of the Islas Canarias, and is also very famous for its carnivals. You will be able to explore this island any time of the year, a place where you can discover the volcanic origin of the island, its vast natural areas with autochthonous vegetation or its typical small, white-coloured villages that will surely seduce you. Christopher Columbus, the famous discoverer, stopped by the beach of Maspaloma, one of the most popular ones in the south of the island, during one of his expeditions. This is, without question, an incredible city with fascinating hidden places to discover.

What curiosities are there in Gran Canaria?

In the middle of the Atlantic Ocean are the 6 islands that configure the Islas Canarias. It is said that, its name, means 'land of the brave', and bravery is all you need to book a flight and enjoy exploring each of the corners and spots of this paradise island.

In the northwest of the island, in the valley of Agaete, you will find the only place in Europe where coffee is elaborated.

The traditional 'lucha canaria', a wrestling style that has been practiced ever since the first, aboriginal 'guanche' tribes invented it.

Any time of the year will be a perfect occasion to visit this island, with an average temperature of 20ºC during the whole year. 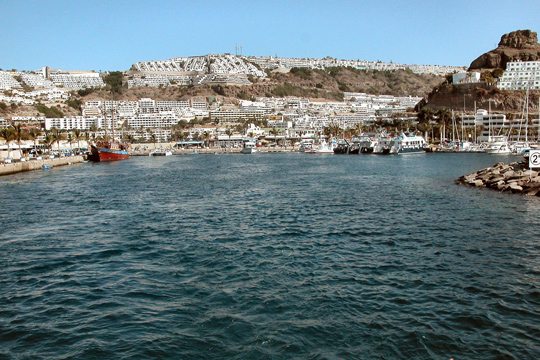 Where to stay in Gran Canaria?

This island has an accommodation offer fit for all possible budgets. If you prefer a more urban setting, the city of Las Palmas is your place to go, where you will beaches such as Las Canteras, where you will be able to relax after a long night of having enjoying the most famous carnivals in Spain. As we have already mentioned, you will find in the south of the island one of its most popular beaches, Maspalomas, where we recommend you stop by at least once, together with the 'Playa del Inglés', a place with incredible natural views that you will fall in love with. Apart from being a very lively place, you will find in both of them many facilities to practice any kind of sport, as well as many bars and restaurant to enjoy during the day and, of course, many others with the best nightlife. Slightly more sophisticated are the establishments near the beach of Meloneras, where you will find many luxurious restaurants, and top brand shops and, when the night comes, here you will be able to try the most exquisite dishes, in the most exclusive restaurants,which you will also be able to do so in Puerto Mogán, known here as the little Venice in Canarias.

You will also find dreamlike beaches, and very vast sand extensions in the beach of Agaute, where you can also enjoy spending some time sunbathing in the beach, and exploring the historical center, with white houses from the 19th century, and walk to the Natural Park of Tamadaba. 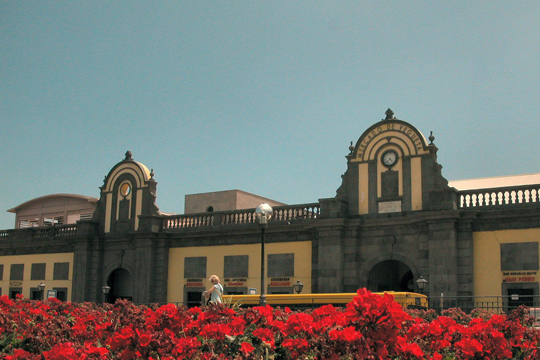 What to do in Gran Canaria?

After the island was conquered, many of its ancient heritage was destroyed but, luckily, places like the Cueva Pintada de Gáldar or the Cenobio de Valerón, a group of very peculiar caves, interconnected one with the other and located at the north of the island, survived.

In Vegueta, the oldest urban construction of the isle, you will find some of the most impressive historical monuments of the island, amongst which you will find the cathedral of Canarias, the most iconic one in the island, built in the 16th century as a combination of Neoclassical and Gothic styles and a classic example of the regional architecture. Next to it is the Plaza Mayor de Santa Ana, near where you will find many other important monuments in the history of Canarias, such a dogs statue that has become a symbol of the city. And not far from there you will also find Casa de Colón, a museum devoted to this historical figure where you will discover the importance this islands had in the discovery of America. The Museo Canario is also nearby, where you will be able to learn more about the history of this island.

And if you are into more exciting activities, scuba-diving specifically, we have a list of the places to do it. 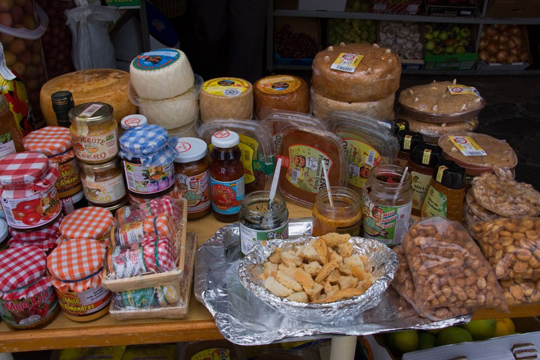 What to eat in Gran Canaria?

The traditional 'guanche' culture, the Latin American or the African one, are some of the main influences you will be able to taste in the local gastronomy of the Canarias. One of its oldest recipes is the 'bienmesabe' (taste-well), and with such a name we can guarantee that you will like this sweet local delicacy, as typical as the famous local bananas, grown all over the from Canarias archipelago.

'Potaje de berros' is a dish elaborated with the local vegetable produce, whereas the 'puchero canario' is a slight imitation of the traditional 'cocido madrileño'.

Nevertheless, some of the other more traditional dishes that might ring a bell to you are the 'papas arrugadas', accompanied with some 'mojo picón 'which, as the word 'picón' indicates, are quite spicy. And, of course, you mustn't forget to try either the local fish and seafood, such as octopus, 'lapa, or 'pejines', also served with this local spicy sauce 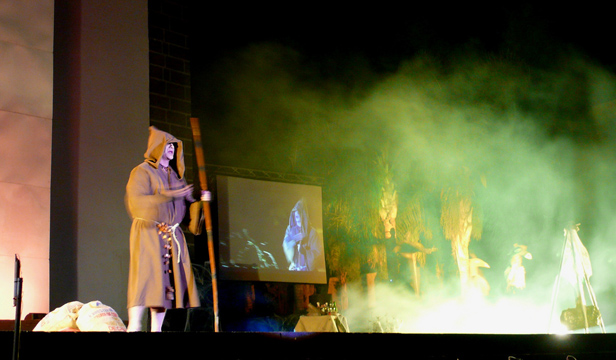 Where are the Gran Canaria festivities?

The most popular festivities of this island are, without question, the carnivals, celebrated in March or February. An unforgettable experience for visitors, which has been celebrated for more than 500 years, and from the day of its traditional announcement or 'pregón', until the Entierro de la Sardina, thanks to the Gala de la Reina or the Gala Drag Queen, where those who participate wear not only very extravagant costumes, but also music and groups.

Water, mud and 'gofio' are some of the most important elements representative of this island, which are also part of the festivity of the Traída del Agua, in Telde, the 12th of August, the Fiesta del Barro, honouring the importance of mud as an essential material for the local artisans, at the beginning of July in the town of Santa Brígida, as well as the Bajada del Gofio, another traditional product present in its gastronomy, all of them part of the festivities of Nuestra Señora del Rosario en Agüimes, the last Saturday of September.

How much does it cost to rent a rural house in Gran Canaria?

What type of housing do travelers usually prefer to sleep in Gran Canaria?

When are reservations made in Gran Canaria?