The BEST country houses to rent at Fuerteventura

We have an average score of 10/10! See what they think of our properties in Fuerteventura

Hosted at Hotel Rural Restaurante Mahoh
We have spent 5 relaxing and wonderful days in this fantastic rural inn. The tranquility is absolute, the decoration of the beautiful room, the stone walls protect from the heat and the cool that it was at night. The treatment has been very pleasant, because both Sandra and Montse, or any of the two waiters in the restaurant are very friendly, and they have a pleasant conversation. In the restaurant we had dinner for three nights, each time trying something different and it was all delicious. The only thing I missed is some fresh fruit and a bit of variety in teas for breakfast. Otherwise perfect. In fact, the breakfast croissants are a vice. I encourage anyone who wants to enjoy a few days of rest and tranquility, away from mass tourism, to spend a few days here.
A
Arantxa
5/5 dec-2022

Hosted at Hotel Rural Restaurante Mahoh
We spent some delightful days in this lodge. An unbeatable, close and loving treatment. We enjoyed the pool, the restaurant (those dinners, Carlos, after a long day touring the island), and the nights under the porch. Our daughter, delighted (she still asks for you, Denis. A great option for calm, simple, for those of us who flee from a type of "beach" tourism that we don't like (the one in the south of the island, that strange paradise that is Fuerteventura).
N
Nekane
5/5 dec-2022

Hosted at Hotel Rural Restaurante Mahoh
My comment is reduced to the pleasant experience I had in Mahoh, at a dinner, after having stayed here and I can say that the place is very beautiful, very well decorated, and that the food is fantastic, the quality of the products is amazing They use naturals, and the service was great. I encourage all who go to the island to visit it because they will not regret it.
C
Cintia
5/5 dec-2022

Hosted at Casa de Las Portadas y Fimbapaire
I have spent a week in the house of the covers, for me it has meant a dream come true and an illusion lived. The accommodation is very good, everything is perfect, cozy and very comfortable; the patio is a joy, intimate and with extraordinary views. The owner is a super friendly and generous man, always attentive to any detail to whom we reiterate our thanks.
M
María del Mar
5/5 nov-2022

Hosted at Casa de Las Portadas y Fimbapaire
This has been the first time we have stayed in a rural house and we have really enjoyed it! The views are splendid, so every morning we had breakfast in the garden, and in the evening, although the air was a bit cool (early February), as the house has a barbecue, we also dined in the garden. The house is perfectly integrated into its surroundings, preserves its traditional architecture and is a comfortable accommodation with all the necessary utensils (including CD player for music lovers).
I
Iker
5/5 nov-2022

Hosted at Casa de Las Portadas y Fimbapaire
We have been at home. La Oliva is the ideal place to spend a week enjoying the sea and spectacular beaches away from the tourist crowds that spoil some parts of the island. The house is very comfortable, well maintained and clean. The hospitality, kindness and discretion of Pedro, its owner, whom I greet from here, is remarkable. Also a memory for Guillermina who I hope will see her chicks hatch soon and raise them healthy.
A
Ariadna
5/5 nov-2022

If you are thinking about taking a break and escaping to a paradise-like island, rural tourism in Fuerteventura has everything you are looking for to book yourself a perfect holiday stay. Come for the peace and quiet of its beaches, and for the history that still lives in each of its villages and towns, and the many secret spots where you will be able to discover the longtime seafaring tradition of this island, such as in place like Cotillo, and impressive natural views such as the viewpoint of Degollada Agua Oveja.

You will even find here some archaeological sites with findings from the prehistoric era that we recommend you check out.

A very complete and rich experience by the waters of the Atlantic Ocean. We can help creating the best experience for you, so that you can get lost in the vast immensity of this place.

What to see in Fuerteventura?

Less than 100 Km away from Africa's west coast, you will encounter this island, a UNESCO Protected Biosphere in its entirety. Explore its towns and villages and discover the characteristic white architecture of their houses, where relaxing near the seashore of the Atlantic Ocean will be a priceless experience.

Any time of the year will be a good time to visit the oldest island of the archipelago and, even though here there is an average temperature of 21ºC during the whole year, this island congregates some of the most experienced surfers during summer, when it becomes the venue of the kitesurfing and windsurfing world championship.

Even though this is one of the most arid island of the Islas Canarias due to the influence of the Sahara desert, waiting for the sunset in its shores is a unique experience that you will never forget.

What curiosities are there in Fuerteventura?

Legend says that this island could be part of what we know as the ancient civilization of Atlantis, but what is not a legend is that each spot of this Protected Biosphere is spectacular.

You will find in the north of the island the beaches of Corralejo, within the Natural Park of Dunas de Corralejo, one of the top 25 beaches of the European continent.

The capital of the island used to be Betancuria, and it is also the one with the oldest monuments of the archipelago.

1996 was the year one of the local products of Spain, a goat's cheese from this island, achieved PDO status. 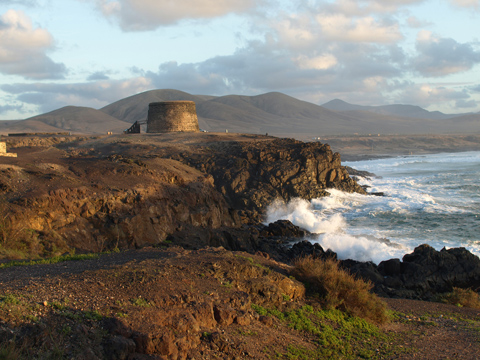 Where to stay in Fuerteventura?

Although this island is full of many amazing, natural landscapes, we strongly recommend you include some of them to your list so that your holidays aren't lacking anything.

The first of them is Jandía, which you will find in the south of the island, although you must be aware that you will need a car to move around the island, and enjoy of its golden, fine sand and crystal-clear waters.

In the northernmost part of the island is Corralejo, usually busier than the rest but an ideal destination for a family trip, where you can plan wonderful day expeditions to Isla de Lobos, or go on a ferry trip to Lanzarote, as well as being able to do scuba-diving in the deep waters of the Atlantic Ocean.

Not far from the capital, you will find Caleta de Fuste, very close to the airport and where you will find not one but two shopping centers, apart from many other leisure activities that will make sure both the young, and the not so young ones, enjoy having a time you will never forget. 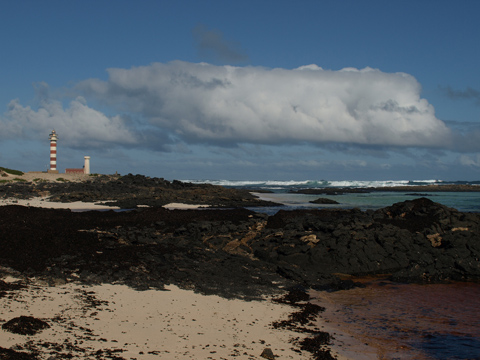 What to do in Fuerteventura?

Music festivals have become very popular recently here in Spain and in this island specifically, such as Lebrancho rock or Fuerte Música, where many popular Spanish artists come to this island to showcase their music.

The auditorium of the capital, Puerto del Rosario, has been the stage for some well-renowned artists. Here, you will also be able to visit the Casa Museo de Unamuno, where the Spanish writer lived between in 1924, during his exile in the island, but many other artists have contributed to the city, leaving us with more than 50 different outdoor sculptures in the Parque Escultórico.

You cannot forget to visit either a small, 7 house, village where you will be able to admire the local architecture, and which have been restored without losing an inch of their essence of traditionalism, so that they can take you back to how life in the island was in the old times.

You will also encounter many other interesting places to visit here, such as the ones we suggest below. 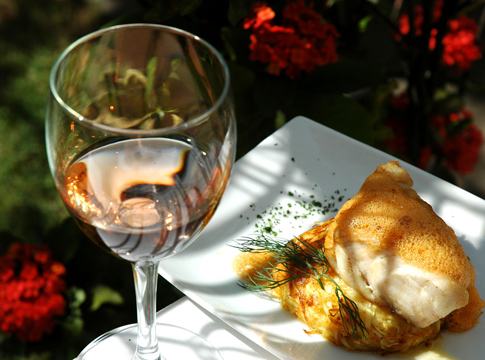 What to eat in Fuerteventura?

In the local gastronomy of this island predominate a specific kind of recipes shared by the rest of the Islas Canarias, but which still keep the local flavours. Amongst the more popular ones are 'papas arrugadas' with 'mojo picón, a very typical spicy sauce very popular in the whole archipelago, as well as a local variety of stew known as the 'puchero canario'.

Amongst the most popular ingredients commonly used in the local gastronomy is fish, particularly 'pejines'. 'Corvina' and 'cherne' are also very popular fish, usually boiled and served with some 'papas' or the traditional 'gofio'.

The local way of preparing meat here is usually on the grill, and the most popular ingredients prepared in it 'bafio' and 'cabra majorera', the latter also famous for its cheese. 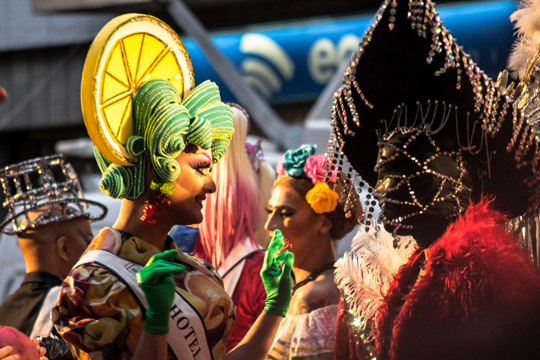 Where are the Fuerteventura festivities?

The most important festivity celebrated in the capital honours Nuestra Señora del Rosario, held the 7th of October, and during which the streets of Puerto del Rosario are filled with music and activities for the young ones and those not so young. Carnival is also celebrated between February and March.

August in Fuerteventura is synonym of enjoying of a great number of events, since the shores of Jandía welcome each summer the kitesurfing and windsurfing world championship, a spectacular aquatic show that you will be able to enjoy if you come during this period. The young ones will also be able to enjoy during the second half of August of the great variety of activities organised for the Semana de la Juventud, in the town of Gran Tarajal.

How much does it cost to rent a rural house in Fuerteventura?

What type of housing do travelers usually prefer to sleep in Fuerteventura?

When are reservations made in Fuerteventura?