Get deep into the literary province of Toledo, Miguel de Cervantes preferred setting for his characters. A place stuck in time and of such vast cultural heritage that played a key role in the history of Spain. This province located in the west off the Spanish region of Castilla La Mancha, shares together with Ciudad Real some of the wonders and beauty of this region, and with those who come to do rural tourism here for the richness of its nature, culture, and gastronomy.

This city famous for its swords, was many centuries ago the capital of what was then known as the Spanish Empire, and the essence of the memories from that time is present in the many medieval buildings that have survived time and the history of Spain. Get lost in its streets and enjoy of a charming and ideal city, no matter what your reasons to stay here were. The climate has been a huge influence on the flora and fauna of this region, as it of an extraordinary variety. The people from Toledo are familiar and always glad to receive visitors. Do not hesitate and make this the destination of your stay. From the capital, with the Tajo river as the central point upon which the city stands, crossed by the impressive bridge of San Martín, slithering all over the Alcázar, the cathedral, and the palace, and many other spots away from the city such as El Toboso. Toledo is full of surprises. Once you discover the mosques, synagogues, and churches that stand in this city, after which it is also known as “The City of the Three Cultures”, you will find many protected natural spaces such as the National Park of Cabañeros, la Jara, which ca be crossed through the Vía Verde. A perfect combination of both culture and nature that you will be able to experience while you stay in the best accommodation.

If it's your first time visiting Toledo, we recommend you split your time into urban and rural, and also find accommodation somewhere near the capital of the province. Toledo is a small city but the province is very big in comparison. Do not wait until the last minute to book your accommodation, since there are many special occasions and local fair that might make it impossible for you to find accommodation depending on the time of the year you are coming. Talavera de la Reina, Consuegra, Puebla de Montalbán and Malpica complete the list of cities in this province. As for more rural areas, we recommend checking out, obviously, the so world-renown house of Dulcinea in El Toboso, Los Navalucillos or Villanueva De Bogas.

Enjoy the mountains of Toledo, with the warm weather and summer breeze (imagine doing so in a swimming pool), and of the cold winter months by a fireplace, are some of the things that are waiting for you in Toledo. The most popular and important natural spot here is the National Park of Cabañeros, a place where you can spot giraffes in Toledo, as well as the iconic Spanish golden eagle. If you like more active tourism, we suggest you visit El Chorro and the area of Navalucillos by the banks of the river Tajo, and check out the gorgeous waterfalls where you will be able to do water sports such as kayaking. If, on the other hand, you decide to stay near close to Toledo's plateau, you can enjoy of what its plain can offer in places like Barrancas de Burujón, a city that is always difficult to leave; the main reason people always come back to Toledo.

Toledo is one of those cities where you can fall in love with its artistic heritage, and for this very same reason it has been deemed UNESCO World Heritage Site. Toledo is a monumental city and, without question, one of the cultural capitals of the Iberian Peninsula. Toledo's Alcázar is probably the most emblematic monument of the city that you must visiting, where the famous recording of a general and his son being imprisoned during the Spanish Civil War was made, which you can listen in the Plaza Mayor de Tembleque. Other places you mustn't forget to visit are the city walls, Las Puertas de Alcántara, Cambrón y de Bisagra, the house and museum of the famous Spanish painter El Greco and, of course, the cathedral of Santa María de Toledo. So, are you coming?

Toledo has some of the most spectacular views, and a heritage that will reveal the essence and history of this place. If you would like to enjoy of an experience where culture and history are perfectly combined, making together with its natural environment the perfect panoramic views, this is the right province for you.

Part of the region of Castilla La Mancha, it is located in almost at the very center of the peninsula. It is perhaps due to its location that it has been occupied many times by several cultures, which have left many traces of their presence in the region. You will still able able to discover all those references to the past along the city, since the great majority of them are kept in almost perfect condition nowadays. Toledo is a province that will make you fall in love with it thanks to all the things we have mentioned above, apart from the many activities for all ages and likings that you will be able to do here, and anywhere in the province.

About the region of Toledo

This is a province full of charming spots, where you will also discover many natural spaces, especially in the outskirts of the city. Nevertheless, as you walk along the city you will be able to enjoy of the panoramic views of the river Tajo, that you will also be able to enjoy from Talavera de la Reina, another important city in this province.

Amongst the natural places of interest you will find here, the most important one is perhaps the National Park of Cabañeros, that you can also visit of you are near the province of Ciudad Real.

The views you will get from the Montes de Toledo, a group of mountains that reach up to 1,400 metres of height, are also home to a beautiful landscape in its southern part.

As for the climate, stable and mild temperatures predominate in the whole province, and rainfall is concentrated in the winter months, whereas summer here is usually warm and dry.

And, of course, to wrap up your stay in this province, you can't miss the chance of trying the local gastronomy. 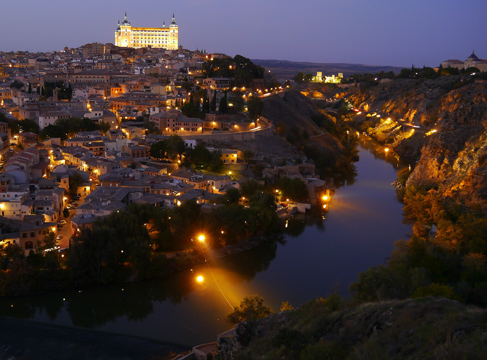 Where to sleep in Toledo

You will find in Toledo a great variety of accommodation options where you will be able to enjoy of the many possibilities this region offers. If you would like to stay in the capital, do not waste another second and do it as soon as you can, since it is the place with the highest demand. It is also a place that is never completely empty of tourists, and welcoming more and more visitors each year.

In the capital you will find a predominance of hotels, although if what you want is to enjoy of the peace and quiet of rural tourism, we suggest you consider the towns and villages near the city.

Here you will also be able to discover places such as El Real de San Vicente, which is one of the towns with the roughest landscape of this area. It has a population of 1,000 inhabitants, and some of the most spectacular views.

If you were imagining Toledo's iconic postcard-like windmills and golden plains, then you are picturing the town of Consuegra, one of the most beautiful ones within the Ruta de Don Quijote. Escalona is another beautiful place you should check out, embraced by the waters of the river Alberche, and its unique heritage, as the result of the relevance this small town had during the time of the Spanish Reconquest. 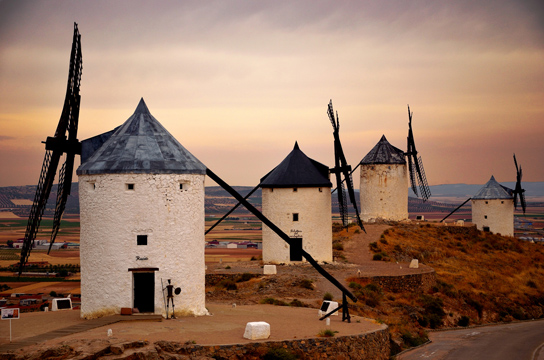 What to do in Toledo

Toledo has been know for many centuries as the “City of the Three Cultures”, which means that it is a true gem for those tourists who would like to visit the city, which is full of unique and singular places that have kept the essence of its past.

Amongst the areas that you mustn't forget to visit is the Puerta de Bisagra, which is the door through which one enters into the city center. The Plaza de Zocodover is one of the most famous and central ones that you will find once you cross the river.

Belonging to the Arab tradition, you will within the historical center the mosque of Cristo de la Luz, a must in Toledo that paints a striking contrast with the Roman road right next to it. An exquisite mixture of cultures.

The city hall and the cathedral, both built in the Gothic style, are two other musts that shouldn't be missing from your visit to Toledo.

And, of course, you need to walk by the most traditional establishments that decorate the city center, where you will be able to indulge yourself in the local gastronomy, and try some new flavours. 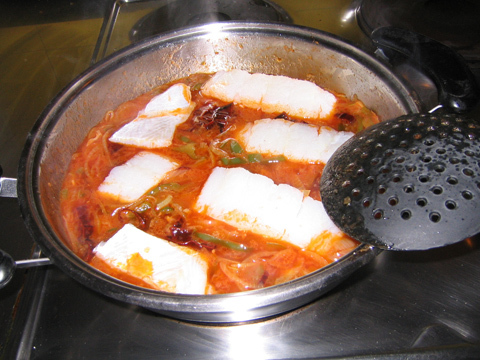 From the local gastronomy we can tell you about its connection with Castilla's tradition, very present in the local dishes. You will find its typical dishes follow some of the most traditional and ancient recipes you could possibly imagine. The majority of them elaborated with dry farming products harvested in this area.

The saffron from this area has PDO status, and it is the result of a long tradition of cultivating and harvesting it. It is a whole institution here in Toledo as well as in its surroundings, so much so that there there are festivities in some town in its honour, such as in Consuegra.

Some of the most typical dishes are those of humble origins, such as 'migas', 'gachas', or 'pucheros'.

Fricassée dishes, such as partridge or 'bacalao ajoarriero' are also very common in this area.

Amongst the local sweet delicacies you will see 'mazapán' is the star product in this sense. And as for the local wine, you must try the Méntrida PDO variety. 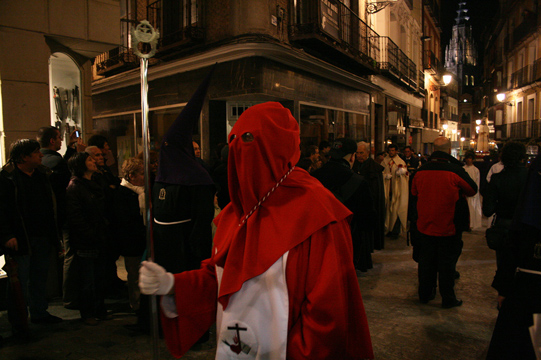 The local festivities of each province, as it usually the case, are the best way to learn more about the culture, tradition and folklore of each region.

The local festivity of the city of Toledo is celebrated during summer, August 15 more specifically, and honour the Virgen del Sagrario. During this day, many events are organized, and it always finishes in the church's cloister, where the water, which is considered to have miraculous properties, is shared. Another very important date in the province is the celebration of the Corpus Christi, or religious origin and accompanied with many other religious practices and events.

The Fiesta del Olivo is celebrated in Mora during the last weekend of April, gathering each year many followers, and filling the streets with street processions, horse parades and music bands. Easter is also a special occasion widely and fervently celebrated in this province, especially in Talavera de la Reina.

We have an average score of 9/10! See what they think of our properties in Toledo