The BEST country houses to rent at Guadalajara

We have an average score of 8/10! See what they think of our properties in Guadalajara

Hosted at Apartamento Aire
Some very positive vacation days to clean the slate and return with charged batteries. I went with the family in March and the children were the ones who had the best time with the animals they have in the area and the playground in the town. We also do some outings in the area, the natural environment deserves it, pairing along the river bank and also doing a night walk. Toñi the owner is a very nice woman who will give you great advice for doing rural tourism in the vicinity of the accommodation.
M
Maria Teresa
5/5 -2023

Hosted at El Zarzal
A total of 12 people were for rent during the July holidays for a week. Ideal days in which we have discovered the Horche area. The garden with a pool with views ideal for families with children, very cozy and in a very quiet area to enjoy the countryside, the vegetation and the mountains.
M
Mar
5/5 dec-2022

Hosted at La Chocolatería
The stay has been very good, we went on a weekend in November a group of friends with the children, the house is great, very well equipped and clean, and the owner Pilar is charming, she was very attentive for anything we would need and she was teaching the children the donkey, goats, chickens. We will surely repeat.
E
Emma
5/5 dec-2022

Hosted at Casa Andrea
We rented this accommodation in Horche a family with 9 people and 4 children and we had a great time during a weekend in March. It is very close to Azuqueca de Henares and all the villages of Tajuña. The house is spacious, a group can go even more numerous than ours. The host Pilar is a charming woman, very willing and very discreet, very important during a vacation. What we liked the most was the fruit and vegetable garden and for the children the farm where we collected eggs.
P
Philip
5/5 dec-2022

Hosted at El Zarzal
Every year at TLCMarketing we celebrate the arrival of summer with a party that we look forward to and that is one of the most important events of the year. This year we had the success of doing it at Casa Rural Andrea. The unbeatable setting, the treatment of Pilar and her friends, Juan's paella, the sunny day, the pool, the barbecue and the charm of the place made the event a success.
P
Pepi
5/5 nov-2022

Hosted at La Chocolatería
We got together a group of 26 friends to rent the two houses (Andrea and Chocolatería) one weekend in March. Exceptional rooms, exquisite treatment by the owner, facilities and various services. Pilar the hostess: a solete. This rural accommodation is a fabulous corner where you can think that other worlds are possible. Thank you very much, Pilar, for opening those doors for us.
R
Raúl
5/5 nov-2022

Guadalajara is a capital with many natural spaces, of which we recommend Sierra Norte, the Lagunas de Puebla de Beleña, or the cave in Canaleja.

On the other hand, its more than seven aquifers, located all in the Alto Tajo basin, are another highlight for those who are looking for some time to relax in nature.

You will also find in this province many towns and villages that are at the very epicentre of traditional tours and tourism, which makes the turismo rural en Guadalajara very abundant in this area, in places like Sigüenza, Molino de Aragón and, of course, Torija and the huge castle in the latter.

Here, the typical black slate architecture tries to combine and recover the materials that were used traditionally in this area, and is present in many small towns in this region of deep-rooted tradition, such as in Majaelrayo, El Espinar, or Valverde de los Arroyos, amongst many others. Many of these are hiding under the Pico Ocejón, perhaps the most well-known mountain of this region.

Some of the most important festivities celebrated here are of pagan origin,dating before Roman times, and are still celebrated nowadays. This is the case of the botargas, an event worth experiencing to see a lesser known side of Guadalajara.

To finish with your trip, we recommend you try the local gastronomy, where the lamb and the goat kid, are the main protagonists of the food that will accompany this journey.

What to see in Guadalajara?

You will find in Guadalajara a dynamic and familiar environment, with streets where you can feel the hospitality and kindness of its people. Its connection with Spanish monarchy and aristocracy has made it possible for us , and anyone who's visiting, to enjoy of its vast artistic and monumental heritage. And the same goes for the landscapes here, with the crystal clear waters of the Henares river as their protagonists. And don't forget about the gastronomy, as rich as abundant, or its very wide cultural and entertainment offer, which also bring a more modern and lively vibe. Guadalajara is, without question, a city with many things to see and discover.

What curiosities are there in Guadalajara?

Founded by the Arab community who lived here between the 8th and 9th century, the origin of the name of Guadalajara is in the arab word «wād al-ḥaŷarah» (river between rocks), a name that was initially given to the Henares river.

The great location of Guadalajara have made it possible for the city to host many important sport events. One of them is the mundial competition of rhythmic gymnastics, celebrated here for two consecutive years. 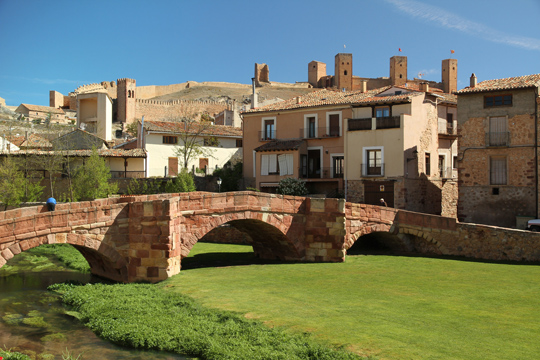 Where to stay in Guadalajara?

The city itself is divided in different quartiers, each of them with its own charm and its own character. If you would like to learn about the origins of Guadalajara, there is no better place to do so than in Cacharrerías, the place originally chosen by the the Arab community to settle and expand their territory by the river Henares. In the Alamín quartier you will discover many streets from the Middle Ages, that were also home for the muslim farmers. In Manantiales you can go for a walk by the river Henares, and enjoy of its postcard-like views.

In the surrounding inland villages you will find a very broad offer of rural accommodation that is both comfortable and modern, as well in a quiet, rural setting.

It is also one of the preferred destinations for the people from Madrid, since it is not far from the capital. These are some of the ideas that we recommend for your trip. 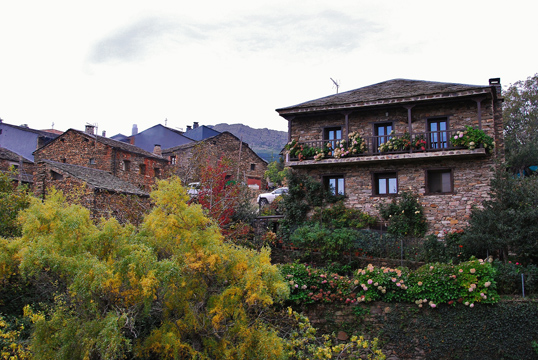 What to do in Guadalajara?

You will discover in the city of Guadalajara a mixture of culture and nature: the first one is characterized by monuments such as the Alcázar Real, the origin of which goes back to the 9th century, or the Palacio del Infantado, built in the gothic style; the second one, comes with more than 2 million square metres of natural spaces, such as the case of the natural reserve of La Concordia.

You can also visit not one, but three natural reserves: Alto Tajo, Barranco del Río Dulce, and the mountains of Sierra Norte de Guadalajara. Apart from other natural reserves such as the Lagunas de Puebla de Beleña, and places of natural interest such as the Cueva de La Canaleja.

If you want to get deeper into the province, you must do the tour Pueblos de la Arquitectura Negra, which showcases the traditional local style in which many houses here are built, using black slate. Amongst the villages and towns that will come up, we recommend Valverde de los Arroyos, where you can stop by the Chorreras de Despeñalaguna, a waterfall that is more than 80 metres long.

Continuing with the inland tourism, we can't help but recommend Sigüenza, a place the beauty of which has granted it the label of Historic-Artistic Grouping, and Molina de Aragón, with its impressive city walls and very old streets. 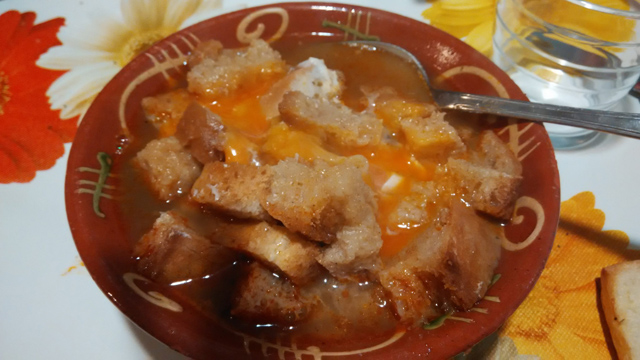 What to eat in Guadalajara?

Guadalajara's recipe book awaits for you, with many traditional and rich recipes, which reflect the humble, agricultural origin of this region. In it, you will find typical dishes such as garlic soup, and and the traditional 'migas', as well as succulent dishes like 'judías con chorizo', and 'gachas'. You will also find many roast dishes here, such as roast lamb and goat kid, without forgetting about its mushrooms, collected during autumn. And the best end for such a tasteful meal, 'bizcochos borrachos'. 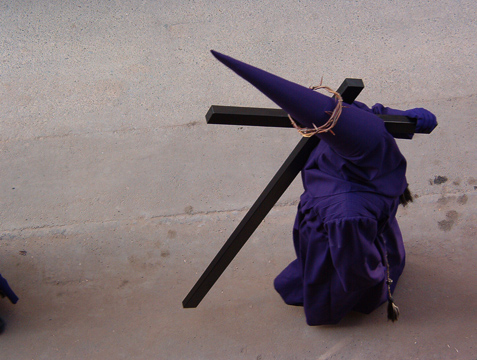 Where are the Guadalajara festivities?

The main festivity in Guadalajara is celebrated in September 8, honouring the Virgen de la Antigua, the patroness of the province. During this day and the following ones, people commemorate this occasion performing parades,'charangas', 'encierros', bonfires and music concerts all day and everywhere in the city. Amongst the religious festivities, Easter in Guadalajara has been declared a celebration of Regional Tourist Interest, as well as the Corpus Christi, both of them dating from medieval times.

Amongst the cultural scene here, we recommend the medieval-themed festival in Hita, which has been held since 1961, the first saturday of July. In it, people prepare performances of some of the most important medieval plays, linked to the work of the famous figure of the Arcipreste de Hita.

How much does it cost to rent a rural house in Guadalajara?

What type of housing do travelers usually prefer to sleep in Guadalajara?

When are reservations made in Guadalajara?