The BEST country houses to rent at Menorca

We have an average score of 10/10! See what they think of our properties in Menorca

Hosted at Llucmaçanes Gran. Fachada Sur
We were looking for tranquility and forgetting about problems, and we can say that we were right with the choice. Dorita and Plácido make you feel at home, they are charming. The rooms, the rural house, the orchards, the swimming pool, the super breakfast, the views of the church from the terrace, and of course, the island, everything makes the stay in the house unforgettable. We recommend it without any doubt.
M
Maider
5/5 dec-2022

Hosted at Agroturismo Binisaid
We are a group from Ciutadella de Menorca, we spent the days of Sincogema in the Agroturismo, it was an excellent option, the place is beautiful, very quiet. The children really enjoyed being able to walk through nature, the terrace is beautiful with its view of the pool, which is a luxury. I recommend to people who want to relax to spend a few days in May or June.
A
Arantxa
5/5 dec-2022

Hosted at Matchani Gran
Very spacious room, abundant and well cared breakfasts, with details of Cati, who every day brought us different pasta or local products, or who offered to prepare poached eggs or omelettes if we wanted. 10 minutes from the airport, but hardly any noise, other than the birds in the morning. Very friendly owners, although we hardly agreed with them twice.
O
Odalys
5/5 dec-2022

Hosted at Hotel Rural Son Granot
I have had the opportunity to stay during this year on several occasions, both for work trips and one of organized rest with some of my family. A wide, arranged and spacious gardens. The clean and big pool. Towels on all loungers. You can choose sun or shade as you prefer. I have found a very good value for money in all the services they offer. The rooms are very comfortable, very tastefully decorated and very clean. Regarding the service in the excellent restaurant: very good quality and fresh food. I have been able to organize business lunches and receive a very professional, attentive and discreet treatment from the accommodation staff. Finally, an exquisite human quality on the part of each and every one of the people who make up this rustic lodging. Of course I plan to repeat and advise my friends.
D
Darío
5/5 nov-2022

Hosted at Hotel Rural Son Granot
A beautiful architecture of a colonial-style building and an exemplary recovery of the entire rustic property. The cordiality of the people of Son Granot invites you to return more times. Only one weekend has known us little, after the month of June we will return.
J
José Antonio
5/5 nov-2022

Hosted at Hotel Rural Son Granot
We stayed there for a week in July with the intention of touring the island, climbing mountains and bathing on the white sand beaches. Mission accomplished. As for the house, I find it beautiful, both inside and out. A visitor.
C
Cristian
5/5 nov-2022

As if taken from a famous film, the landscape of this island has everything you could think of for an ideal group getaway for you and your friends or family, for you and your special someone or even for you alone.

Walking by Ciutadella and its promenade, or visiting the harbour in Maó, or staying in a true fishing village like Fornell, are a few of the many things that will your time here, a unique holiday experience.

This is a small island but with lots of history, much of which you can see for yourself visiting places like the Fuerte de Malborough, where the rule over Menroca was disputed.

For the most adventurous ones, walking up the 300 meters hill of Monte Toro, the highest one in the island, will mean being later on able to enjoy of the best views of the whole island.

If you would like to discover the magic that lives in the rural tourism of Menorca, we can make things easier for you.

What to see in Menorca?

This Balear island is a protected Biosphere, which means that exploring each of its corners will be a unique and fascinating experience, just like having the opportunity of travelling to its nearby islands by ferry. Thanks to the gorgeous coral reefs created in its surroundings by the Mediterranean Sea, you can enjoy of the dreamlike views of Menorca's characteristic landscape.

Narrow streets, the crystal-clear waters of the small, dreamlike bays and the fine, white sand of itd beaches, together with the perfect weather and its rich gastronomy, are some of the things we can assure you will be fascinated, and fall in love with once you come to this island located in the northeast of the Islas Baleares.

What curiosities are there in Menorca?

Virgin beaches, and a singular flora and fauna, and a history of artisan production are what you will find hidden in each corner of one of the most beautiful islands floating in the Mediterranean Sea.

Abarcas sandals are a very typical symbol and clothing item from this island, where the leather and colourful fabrics they are made of, can be combined in any way you want so that they match your fanciest summer clothes.

By its shore you will find some of the best spots to explore the area under water, and practice doing some scuba-diving in this area.

On the other hand, Monte Toro is the highest point in this area, from which you will have the whole island, the sea and the greenery, in front of you. 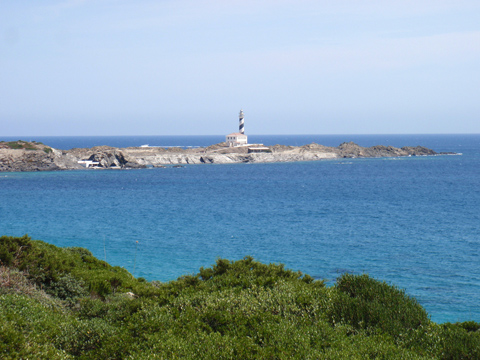 Where to stay in Menorca?

50 Km separate one side of the island from the other, and in any of them you will be able to find the best accommodation to enjoy exploring the local architecture, customs and traditions that other cultures, such as the British or the French, have left on their way.

Since the most beautiful beaches here are the ones that have not been altered by us yet, this means that you won't find any civilization or accommodation anywhere near them, which makes historical towns like Maó, the capital of the island and where you will also find the airport, an ideal place to stay, and enjoy of the many beaches, fishing port, and many other tourist activities that you can do here. Ciutadella is also a perfect destination for your stay thanks t the combination of nightlife, culture and history you will encounter in its historical center, and in the narrow streets that used t be occupied by palaces back in the day. Another great option, especially if you are travelling with children, is Cala en Porter, more in the south of the island where, apart from its beautiful beaches, has a beach cove right in front of the sea, where you can also have a drink enjoying of the amazing views there. 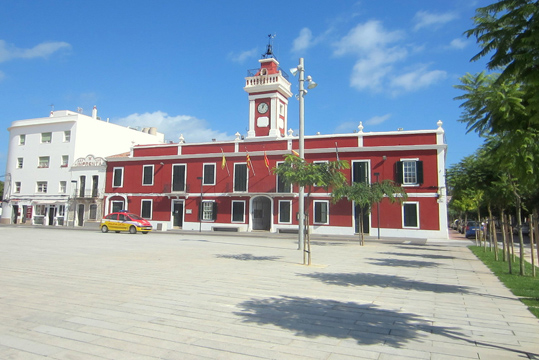 What to do in Menorca?

In the capital of the island, the small city of Maó, you will find its historical center with many narrow streets that will lead you to historical monuments such as the Fortaleza de Mola, used to defend the island from the British troops, Menorca's museum, where you can go back in time to see how the island and its people have changed, or Bastión de San Roc, which are the gates of the old city walls that used to protect the city centuries ago.

Here you will also be free to explore te wilderness of the most impressive historical and natural monuments, some of them dating back to the megalithic era discovered found in ancient caves and stone structures that people used as shelter from the bad weather during those days. The highest point in the whole island is Monte Toro, where you can also visit the religious sanctuary of La Virgen del Monte Toro.

And if you would prefer to relax while sunbathing in any of the wonderful beaches that can be found here, we have made a selection of them for you. 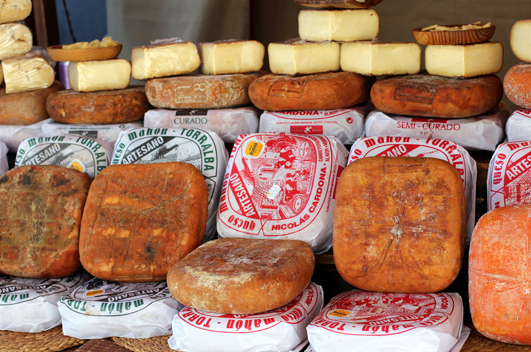 What to eat in Menorca?

Even though it is greatly influenced by the gastronomy of the isle of Mallorca, the traditional gastronomy of Menorca has its own, unique, character. Amongst its more popular products are 'ensaimadas', but the traditional 'coca bamba' is another sweet delicacy that you will often see here, as well as the 'formatjada' but, unlike the latter, this one is not sweet but is filled with the two star products of Menorca: the so famous sobrasada' and cheese.

For the main course, you mustn't forget to try the local fish and seafood products, that are included in exquisite dishes such as 'caldereta de langosta', or 'bacalao ab burrida', with some white, 'alioli' sauce on the side. Maó PDO cheese is an example of how traditional and ancient ways of elaborating certain local products has been maintained after centuries in this island, as you can als observe in recipes such as 'carnixulla', a local kind of raw meat sausage that is a mixture of meat and bacon, and whose origin goes back to Roman times.

Combinating gin and tonic with some lemonade you will obtain 'pomada' which is the most typical drink of Menorca, and that we recommend having a glass of, while you wait for the sun to set. 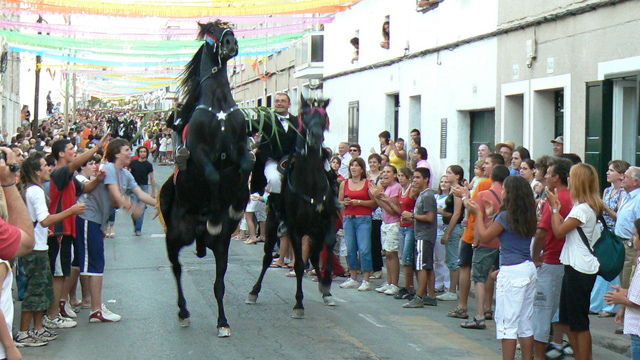 Where are the Menorca festivities?

If there is something that will surely catch your eye during the each of the local festivities of Menorca, that is the presence of horses, usually with a horseman on top doing a balancing act, while the locals encourage the animals to stand up on their feet. And, of course, each rider is dressed on the traditional regional clothes. Ciutadella hosts one of the most popular festivities of this island on June 24 which marks the beginning of summer. From then, and until mid August, each town celebrates its local festivities honouring the virgin and patron saint of Menorca, filling their streets with light and music, up until the early morning hours.

We also recommend checking out the Carreras de Trotones, held in Menorca's racecourses during most weekends.

How much does it cost to rent a rural house in Menorca?

What type of housing do travelers usually prefer to sleep in Menorca?

When are reservations made in Menorca?