The BEST country houses to rent at Soria

We have an average score of 10/10! See what they think of our properties in Soria

Hosted at Apartamentos Sierra Guardatillo- El Cabezuelo
We were a group consisting of 8 adults and 8 children. We occupy the 2 largest accommodations (El Lindero and La Soriana), they were symmetrical, giving the doors to the exterior facade of the rural house, where we communicated going from one house to another. The accommodations were tastefully decorated, very comfortable, quiet and very clean. The kitchen is very well equipped, with oven, dishwasher, washing machine, microwave, toaster.
L
Leda
5/5 dec-2022

Hosted at Casa Julián
We were a total of 9 people, 3 couples and small children during the Pilar bridge, and it was a wise choice to rent it because of its large size and the facilities that an accommodation of this type gives you since it has a thousand accessories: a lot of toys for children, board games, lots of information with maps and tips on what to do, what to visit and where to eat in the area. That they have charcoal and firewood included in the price seemed like a detail to me, but since they put candies in all the rooms it was to leave an opinion of 10.
A
Alfredo
5/5 dec-2022

Hosted at Cañón de Río Lobos I
Last weekend a group of seven friends were in the rural house of San Leonardo de Yagüe. The excellent rustic house, very spacious and cozy, the beautiful views surrounded by pine trees, we had a barbecue although at the last minute it rained a bit. The Rio Lobos Canyon, we all fell in love with it. House and area, fully recommended.
S
Senén
5/5 dec-2022

Hosted at El Alfar
We spent the May bridge there with friends and family, 6 people and children. The garden is ideal for children to play while the adults do our things or talk, there is no danger. The town can be a good nerve center to visit the area that is very rich in culture and history such as Burgo de Osma with the ages of man when we were, Berlanga de Duero or Catalañazor. We also took an excursion to the Río Lobos Canyon that was very worthwhile.
G
Guadalupe
5/5 nov-2022

Hosted at El Alfar
Cozy country house, well equipped, with a nice garden with barbecue. Ideal if you want to disconnect from the daily routine and be in contact with nature. Excellent treatment of the owners, Marisa, Alfonso and their daughters always very attentive to everything we need. A highly recommended site from where you can make countless excursions, I recommend you visit Calatañazor, Lobos River Canyon, Burgo de Osma among others.
R
Román
5/5 nov-2022

Hosted at Posada La Casona de El Royo
It is a traditional rural house, cozy, very clean, and with great taste in decoration. We rest wonderfully, and its location just a step away from the Black Lagoon makes it perfect for routes. The breakfast is generous and of very good quality, that care and good treatment to the client is appreciated to make them feel at home. Esperanza is a person always ready to help you, close, familiar and attentive to anything you might need.
J
Juan David
5/5 nov-2022

A true retreat of peace and tranquility, this province has the advantage of being one of the least populated ones in Spain by far, so much so, that up to half of the municipalities here have a population of less than 100 inhabitants, making this the perfect place to stay and become one with the calm and relaxation of the great, wilderness of the natural spaces you will find here.

If you are coming for rural tourism in Soria , you will see its heritage is saved to those most intrepid tourists who will be able to enjoy here of two of the natural landmarks of this region: the natural park of Río Lobos, naturally wrought by the water courses of this area, and Sierra de Urbión y Laguna Negra, an enigmatic paradise that was shaped by the shadows of the geography that surrounds this mysterious natural pool.

You will also find here many sites of Historic-Artistic interest and great historical value, and monuments in places like Medinaceli, Berlanga de Duero or Calatañazor amongst others, some of them home to villas where the traces of history are still intact. And if you think that Soria's gastronomy can't get better than the delicious 'torrezno de Soria' or the 'picadillo de chorizo', then you haven't tried their famous black truffles.

Your trip is about to begin.

What to see in Soria?

Soria is one of the provinces of Castilla y León that is perhaps less known. It has spectacular views and, in its inland territory you will find plenty of lovely natural spaces, some of the most impressive landscapes, and many examples of historical heritage that will allow you to learn more about this region, and the history and culture behind it.

Here you will find a spectacular historical and artistic heritage with many examples of the Romanesque art, kept in perfect condition, which predominates in this province. Here you won't be missing leisure and cultural activities either, all of them perfect to all ages and likings.

The local gastronomy is another of the highlight of this region, since you will enjoy of excellent and very varied meals here in Soria.

What curiosities are there in Soria?

Welcome to the north of this Spanish autonomous community, where you will be able to explore areas such as Laguna Negra, Sierra de Urbión, and one of the most important natural reserves of this part of the country, Cañón de Río Lobos.

All of these natural spaces are what surrounds the more urban areas, so imagine the beautiful panoramic views that will accompany you trip here. The culture of this province is closely connected to religion, which means that you will discover in the capital and nearby towns and villages, many churches and monasteries that are a typical sight in this area.

You will also be able to join in one of the most singular Spanish routes, the Camino del Cid, which follows the adventures and journey of the historical figure of Cid Campeador.

If you would like to know more about this route, you cannot miss this. Welcome to the north of this Spanish autonomous community, where you will be able to explore areas such as Laguna Negra, Sierra de Urbión, and one of the most important natural reserves of this part of the country, Cañón de Río Lobos.

All of these natural spaces are what surrounds the more urban areas, so imagine the beautiful panoramic views that will accompany you trip here. The culture of this province is closely connected to religion, which means that you will discover in the capital and nearby towns and villages, many churches and monasteries that are a typical sight in this area.

You will also be abl 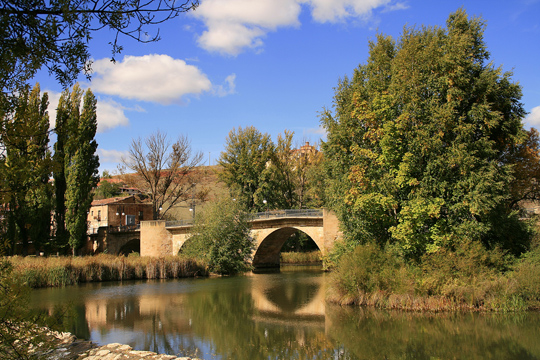 Where to stay in Soria?

As in all Spanish provinces, the capital of the province is where the majority of tourist are gathered, which also means it is where you will have less opportunities to find accommodation.

But the truth is Soria is much more than just it capital; it is its fields, its gastronomy, its culture and its heritage, and it is also the many charming and magical towns and villages that surround ad protect the capital.

Amongst the most beautiful ones, which also make for the perfect rural destinations, is Calatañazor a town with a medieval air and the streets and urban constructions of which are mainly built in stone and, unfortunately, also quite steep. The landscape here is also very beautiful.

Another must you cannot miss here is Burgo de Osma, which is currently an Historic-Artistic site due to the very good conditions in which its monumental heritage from the Middle-Ages has been kept.

Medinaceli, considered a cultural place of interest, Vinuesa and the spectacular views of the mountains of Sierra de Urbión and Sierra de Cebollera and, finally, Ucero which is a place yet to be discovered and which has an impressive templar castle. 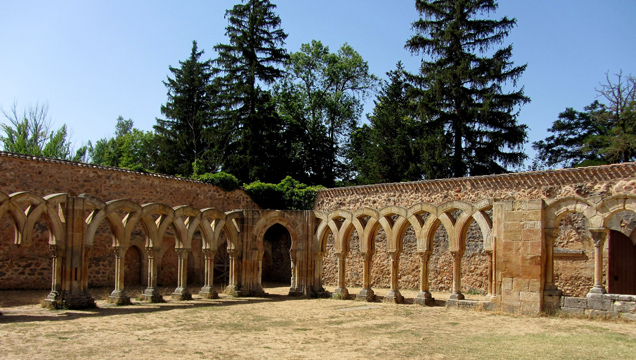 What to do in Soria?

There is a very wide offer of activities to do and places to visit here in Soria.

The history of this province is closely related to religious culture and tradition, which means that you will find here many places devoted to religious cult. Starting with the monastery of San Juan de Duero, this is a spectacular place where you will discover the very essence of the Romanesque art, which you will find examples of scattered all over the province, although you will see that some in some of them there were parts added later during the Renaissance. Also, if you are a sports-lover, you will find around the natural areas that surround the whole province many routes and mountain paths where you can do hiking.

What to eat in Soria?

The gastronomy of this province is the result of all the elaboration techniques, local products and the influences from neighbouring provinces. All of these elements are what make the local cuisine of Soria a very varied and rich one.

Livestock is an essential part of the tradition of this province that is also present in its cuisine,where you will find an abundance of roast meats.

You will be able to appreciate here a mixture of its agricultural tradition, with beans and vegetables on the menu, as well as some other from its cattle-rising tradition, with meat as its main ingredient. Amongst the famous local daily products is goat's cheese in its local Soria variety which has a very intense flavour and aroma.

Amongst the most popular recipes is the 'chanfaina' with lamb as its main ingredient, as well as the local pork loin. To add a final sweet touch to your meal, the butter with which 'paciencias de Almazán' are prepared give this sweet delicacy its characteristic buttery flavour. 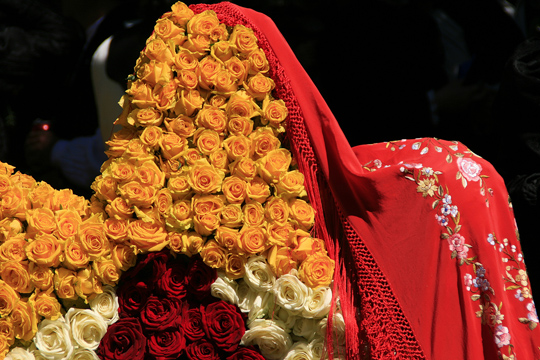 Where are the Soria festivities?

To conclude your trip, we recommend you visit some of the towns and villages of this province when the local festivities are held, which is always the best way of getting to know a place and its people. The culture, gastronomy and, in general, the essence of each of this areas, will add tons of fun to the local festivities. The most popular ones are the Fiestas de San Juan, also known as the Fiestas de la Madre de Dios. They start following Thursday after San Juan (the Spanish celebration of Saint John), and are considered of National Tourist Interest.

Another of the main local festivities honours San Saturio and takes place October 2.

As a Spanish saying goes, "haga frío o calor, San Saturio, el día dos" which means that either cold or warm, San Saturio must be always celebrated on the second

There are also many other local festivities held during the rest of the year along the province that we recommend you check out and see for yourself.

How much does it cost to rent a rural house in Soria?

What type of housing do travelers usually prefer to sleep in Soria?

When are reservations made in Soria?