The BEST country houses to rent at Murcia

We have an average score of 10/10! See what they think of our properties in Murcia

Hosted at Casa Noguericas IV
We have been renting with friends in June, and everything has been perfect, the charming place, the super beautiful and tastefully decorated house, clean, we usually do rural tourism and it is one of the best we have found, and with exceptional views to the mountain and the orchard). You have peace of mind if you want or party 1 kilometer or less, you can walk quietly to the town square of Archivel with 3 or 4 bars where you can have tapas / lunch / dinner at a very good and delicious price.
I
Ivonne
5/5 dec-2022

Hosted at Fraskito II
Perfect place to spend a vacation, if you want tranquility you stay in the house and its surroundings and if you want to party, you have it in the center of town. The super nice, clean holiday rental house with all the comforts. The pool and surroundings are very well maintained. The treatment and the disposition of the exceptional owners. Thanks Juana, we will surely be back next summer, and if we can we will make a getaway in winter that also has to be very well.
C
Caris
5/5 dec-2022

Hosted at Fraskito I y II
We spent a great December long weekend as a family in one of the tourist homes of this rustic complex that we loved. Each of the houses decorated in detail, has even radiant thread and some other things that make a difference in rural tourism accommodation. Archivel, a charming little town, and the owner Juana a charming lady who even had the consideration of preparing a meal for us the first day with typical dishes from the area and it was delicious.
B
Bárbara
5/5 dec-2022

Hosted at Casa Noguericas II y III
My partner and I have been the last week of August in these accommodations, the house is equipped with everything, very neat and with more services than most. It has air conditioning that I had not seen in any rural accommodation, the pool is very well maintained and its surroundings, it has parking, we have been very comfortable. 1 km. There is a square with three or four bars that is full and covered very well, if you want to be comfortable, it is a very cozy town.
P
Pascual
5/5 nov-2022

Hosted at Casa Noguericas III
The house is very well, neat and clean, very cozy, with a wood-burning fireplace which is what I was looking for, on the outskirts of town with very good access. In the town of Archivel there is everything and some bars that cover very well, it is very close to Caravaca with many things to see. It's just what I was looking for, I ended up very happy.
I
Inma
5/5 nov-2022

Hosted at Casa Noguericas I
We have been this bridge of the saints in this rural accommodation. The house is very well equipped, the decoration is spectacular, the wooden ceilings, its wood-burning fireplace, and very cozy. It is on the outskirts of the town of Archivel, in a very quiet area of ​​the countryside. We came to disconnect on vacation and we have been very good. In the bars of the town it covers quite well and the house is complete with everything, very clean, the treatment with the owner has been very good. In addition, the weather has been pretty good despite the dates.
J
Josefa
5/5 nov-2022

This is a region in the Southeast of the Iberian Peninsula, and with a great geographical location that has made it one of the best tourist destinations for everyone's age and liking, which is the reason why it is chosen by thousands of tourists to make this the place for their stay of rural tourism in Murcia.

It has up to 72 cave painting sites that have been declared UNESCO world heritage, and were the first traces of civilization in the country, since it has archaeological remains and construction from each of the cultures and artistic trends that have arrived to the peninsula. You will be able to learn their history thanks to historical monuments such as castles and fortresses dating from the Muslim invasion, up to Christianity. From this first Muslim period belong the city walls and the castle of Nogalte, whereas Santa María cathedral, and the castle of Lorca are Christian constructions.

This region is one of the main producers of fruit, vegetables and flowers, so much so that it is also known as “Spain's vegetable garden”, which in turn has made the local gastronomy one of the healthiest and most varied ones in the country, with the Mediterranean diet as its main inspiration.

Murcia, known as the Costa Cálida de España is also a region yet to de discovered. With its Muslim past and a latent mixture of cultures, Europe's Vegetable Garden will bring you the chance to enjoy of a dream-like holidays. This is also a province that has many beaches, like la Manga del Mar Menor, playa del Portús or the natural reserve of Calblanque, in Cartagena. It is a place fo culture, nature and for visitors like you, who are willing to discover each of its hidden spots.

What to see in Murcia?

Welcome to Murcia! This is a region that is proud to enjoy of up to 300 days of sun, and of its warm temperatures even during winter, which means that the streets here are always at their busiest and liveliest during any time of the year. Along its more than 170 Km of coast are waiting for you virgin beaches where you can barely see any traces of human action, the most popular of them being in Cartagena, or the ones in La Manga del Mar Menor. Monuments, old temples and archaeological sites are some of the things that you will find in its cultural offer, which is also complete with active tourism activities to do in the middle of nature, and with a bonus of a great amount of local festivities and special occasions. Enologic tourism is slowly becoming more and more popular here, particularly in places like Jumilla or Yecla. Discover Murcia step by step, savouring each of the spots and secret places it will reveal to you.

What curiosities are there in Murcia?

People from the city of Molina de Segura were astonished when they witnessed the biggest meteorite in Spain (144 Kg) fall over their heads in 1958. It was later fragmented into 16 pieces, currently exhibited at the Museo Nacional de Ciencias Naturales de Madrid. The torre-campanario of Murcia's cathedral proudly owns the title of being the second tallest of Spain, surpassed only by the Giralda, in Sevilla. 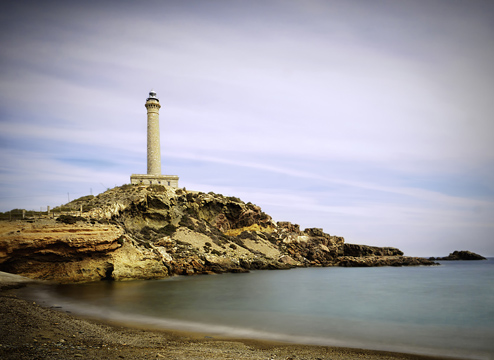 Where to stay in Murcia?

If you would like to stay in the city and be close to the main tourist attractions, let us tell you a little bit about the capital's historical center, divided into the 10 areas in which the city was separated already in the Middle-Ages, such as San Andrés, San Antolín, or the San Nicolás one. You will find in all of them a very familiar atmosphere, and you will see people won't hesitate to offer their help with a huge smile on their faces.

Amongst the more picturesque towns near the city, we recommend visiting Caravaca de la Cruz, right under the Basílica-Santuario de la Vera Cruz, or Yecla a place of a longtime wine-making tradition, Lorca with some of the most beautiful and impressive monuments in the whole region, the fishing town of Cabo de Palos and its crystal-clear waters, or otros pueblos con encanto de Murcia. 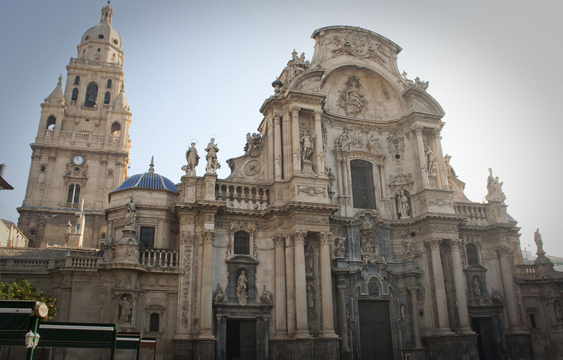 What to do in Murcia?

When talking about Murcia, one cannot forget to mention its beaches as there is up to 192 of them in the region, 21 out of which are distinguished as Blue Flag beaches. The large sand extensions contrast with the smaller, more intimate bays, which means that you will find here beaches to everyone's liking.

Santa María cathedral is the city's most representative monument. After you visit it, you will discover in its surroundings the historical center, filled with historical monuments and a large number of gardens and parks, amongst which you will find the garden of Floridablanca or the one of la Seda.

The tourist offer here is complemented with the destinations in the interior of the province, the most popular of which are Caravaca de la Cruz, Lorca and Cartagena, the latter being home to the roman theatre of Cartagena, built between 5 and 1 B.C. 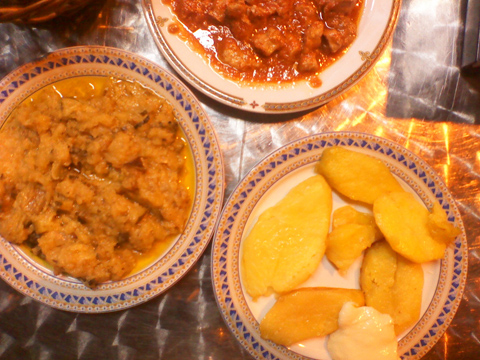 What to eat in Murcia?

Murcia's close proximity to the sea is reflected in its local cuisine that uses fish, specially salted fish, as the main ingredient for most of its dishes. The Menor sea provides with several local fish and seafood varieties, amongst which are the local 'langostino', and the 'mújol' (grey mullet).

Murcia's vegetable produce includes many of the ingredients that are used in the typical 'ensalada murciana' (also known as 'moje'), or in other local dishes such as the 'potaje' or the 'zarandollo' an egg and courgette scramble. One of the most popular local desserts that we recommend is the 'paparajote' elaborated with lemon tree leaves.

You should also know that the regional wines here are of international reputation, with three different PDO designations in the province: Yecla, la de Bullas, y la de Jumilla. 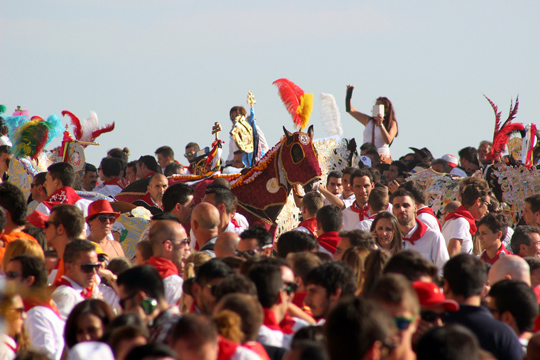 Where are the Murcia festivities?

In the 9th of June is held Murcia's regional festivity, which honours the the date the Spanish law recognised and officially accepted the country's division into autonomous communities.

Murcia is proud to hold several festivities considered of International Tourist Interest: the Fiestas de la Santísima y Vera Cruz de Caravaca (celebrated during the first week of May), the religious festivities organized during Easter week in Cartagena, Lorca and Murcia, or the carnival in Águilas, are some of them.

Other local and regional special occasions that we recommend are the local celebration of Barranca, the night of the drums in the city of Mula, and the Roman-themed Fiestas de Carthagineses y Romanos de Cartagena, all of them considered of National Tourist Interest.

How much does it cost to rent a rural house in Murcia?

What type of housing do travelers usually prefer to sleep in Murcia?

When are reservations made in Murcia?