The BEST country houses to rent at Formentera

We have an average score of 9/10! See what they think of our properties in Formentera

Hosted at Can Aisha
A slice of heaven our own little Oasis! Quiet, calm and beautiful pool, beds and surroundings. Love all the cacti and plants! Federico & Sora were amazing, so is Soras breakfast! Rooms were stunning nice and big, clean and amazing bed! We loved it so much immediately extended our stay! I can’t wait to return!
P
Pilar
5/5 dec-2022

Hosted at Apartamentos Sabina Playa
We were in May for a weekend and our stay was to remember. We were in the small house, very clean and pleasant and with everything we needed to make us stay for 10 with the pool. And if the house is a "cucada", what to say about the garden. Having breakfast on the porch or having a beer enjoying the scenery is one of those little pleasures that create happiness.
J
Jaime
5/5 nov-2022

This is the smallest island of the Islas Baleares, with less than 80 Km of surface that have nothing to envy the larger islands in terms of its touristic opportunities, and beauty.

Some of the places you should definitely write down to visit here are, for example, Faro de la Mola, the oldest lighthouse of the island, and which also offers the best views of it, 100 meters above sea level.

Some of the natural resources here look as if they are almost endless, geographically speaking, such as the Natural Park of Ses Salines, where you will find one of the most spectacular white sand beaches in the whole island.

Since you already have the landscape, now all you have to do is let us give you a hand planning your trip of turismo rural en Formentera.

What to see in Formentera?

This island is located in the south of the archipelago of the Islas Baleares, right at the very center of the Mediterranean Sea, whose waters surround its 70 Km of beaches.

With little more than 12,000 inhabitants, this is island welcomes more than half million tourists each year. The greenery of this island consists of typically Mediterranean forests, and dunes, give this island some unique landscapes that you will be able to explore any time of the year thanks to the pleasant, mild temperatures of this island, around 18ºC most of the year. This island also has two smaller islands in its territory, Espardell and Espamadol, which are inhabited but where you will still be able to visit and enjoy of its crystal-clear waters, and very vast white sand extensions. The perfect destination, without question, to travel with the best company.

What curiosities are there in Formentera?

In the eastern part of the island you will find Faro de La Mola, element that inspired Jules Verne, the famous writer, to write his novel “The Lighthouse at the End of the World”. This is also the oldest lighthouse of the island, that started to illuminate the island in the darkness in the year 1861.

Even though the beaches here are one of the main terrain of this island, the 83 Km that configure the hiking routes of this island that will take you to the inland of the isle, and cross it from one end to another of it.

In this island you will encounter up to 8 Km worth of Neptune grass, a marine plant that has been living in this territory for more than 100,000 years.

Discover here some of the most beautiful towns of the archipelago. 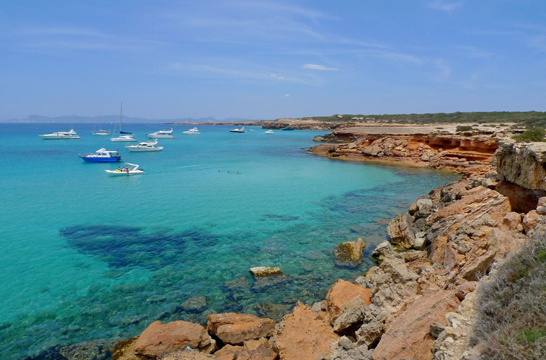 Where to stay in Formentera?

The capital of the island is San Francisco Javier and, even though this town in particular is not connected with the sea, this is the place where you will find the beginning of the many mountain, and coastal routes.

If you are looking to spend the whole day on the beach, one of the best ones of the island is that of Els Pujols, in the northeast of the island, and where you can also visit a charming small fishing village that you will fall in love with. To the south you will find the Playa de Mitjorn, one of the lest crowded ones thank to its 6 Km of beach, and ideal to relax and enjoy of some peace and quiet.

And if what you are looking for is to explore the marine bottom of the Mediterranean Sea, the beach of Calo is your place to go, where you will find some of the most fascinating marine species swimming in its turquoise waters. And without leaving the topic of nature yet, the natural park in Las Salinas is also the perfect place to go, a natural spot the views of which will leave you speechless, and that it also has very good connections with the nearby towns, where you will find anything you might need. 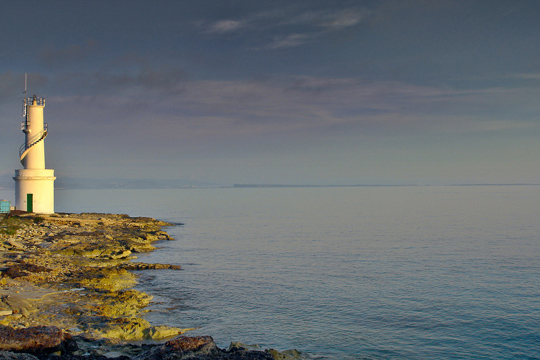 What to do in Formentera?

Amongst the most interesting places to visit in this island, you will find the Iglesia de San Francisco, built in the 18th century, with its characteristic white front, and a very big wooden door at the entrance. Dating from a little earlier, from the 16th century, is the Romanesque chapel of Tanca Vella, which honours San Valero.

The agricultural past of this island can still be witnessed in the windmills that have remained from that time, such as the Molinos de Sa Miranda, where flour was obtained, or the most recent of them, the Molino de San Jeroni, from the 18th century where you will be able to learn more about this agricultural technique in its 3 floors that show the process in detail.

In the natural space of La Savina you will also find the lighthouse that casts its glow in the smallest port of the entire archipelago. 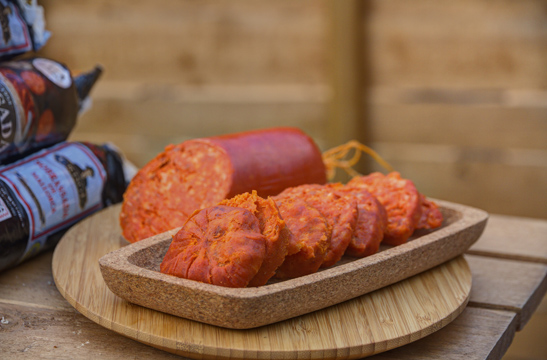 What to eat in Formentera?

The local marine products and dry farming tradition of this island have left their traces in the gastronomical tradition of this island from the Islas Baleares. Amongst its more traditional local products you will find dried fish, often used in 'ensalada payesa'. On the other hand, a we mentioned earlier, there is a great abundance of Neptune grass here, which provides the island with one of its most typical products: liquid salt.

This unique product is added to 'paellas', grilled meat dishes, fried octopus, or 'calamares en su tinta', which are sometimes also accompanied with some 'butifarra' sausages or the regional 'sobrasada'. Amongst its typical sweets and desserts, we recommend you try the Flaó, a cake elaborated with flour and ricotta cheese. And to improve even more your meals, what could be better than adding some of the best local wine to it, such a the one from Terramoll and Cap de Barbaria wine cellars, whose vineyards are divided between the more than 80 ha that make up the island's terrain. 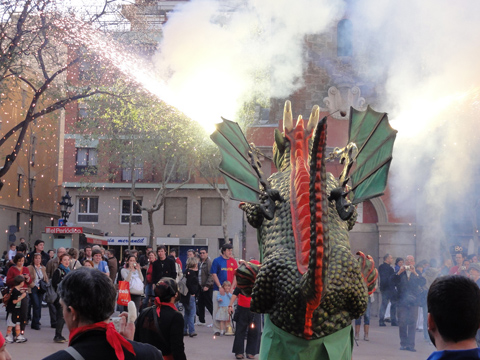 Where are the Formentera festivities?

The festive tradition of this island is characterised by its deep-rooted religious tradition, which means that many proccessions are held during the year in each of its towns and villages. But you will also find many non-religious festivities such as the local carnivals, celebrated at the end of February and during which the Plaza de Sant Francesc is dressed up to welcome some of the best DJs, to add some music to the dance contests that also take place during this celebration.

When spring finally comes to the island of Formentera, at the beginning of March, the farming Olympics take place with the celebration of the pig slaughter, and where folk games such as a wine and cheese contest, are organized.

Right before summer starts, on the 23rd of June, the festivities of San Juan are celebrated and danced to the music of the traditional bagpipes from this island. And a month later, on the 25th of July, the local festivity of the Diada de Formentera is celebrated, providing both the young ones and the not so young ones with tons of fun, dancing and singing, until you lose your voice.

And to finish the year, nothing like going up to the Mercado de Navidad, where the little ones can also enjoy of the theatre performances, Christmas carols, and unique warm and familiar atmosphere of this place.

How much does it cost to rent a rural house in Formentera?

What type of housing do travelers usually prefer to sleep in Formentera?

When are reservations made in Formentera?