The BEST country houses to rent at Teruel

We have an average score of 9/10! See what they think of our properties in Teruel

Hosted at Apartamento Carmen - Santa Águeda
It is a great accommodation to rent as a couple because of its cleanliness, equipment, good and delicious bed, soft cotton sheets, Jacuzzi, but above all because of the silence that is breathed. Carmen the hostess is attentive and available. There are good places to buy food in the town of Valderrobres, which is beautiful. It is worth going for a walk through Els Ports de Beceit, Horta de Sant Joan, La Fresneda, there are many paths to do routes of two or three hours.
A
Abraham
5/5 dec-2022

Hosted at Apartamento Pascualeta - Santa Águeda
We decided to make room to find a weekend of rest and relaxation and we succeeded. The little house is in the old area of ​​Valderrobres, near the Plaza Mayor, but far enough away to have privacy and that the noise does not disturb. They are very cozy accommodations with everything you need. The owner is very friendly and you can call her for whatever you need. We would certainly repeat it if we returned to that area.
A
Antonia
5/5 dec-2022

Hosted at Casa Rural Abuelo Luis
We were on the bridge of the cincomarzada 11 people from the Aragonese area and we are all very happy. The holiday home is perfect. Well furnished, very clean, well cared for, it has everything you need, it has good heating, good distribution. Anyway, all very positive. Mrs. Pilar was very attentive to us and left us some things to make paella. We made a visit to the Gallocanta Lagoon and little else because the trip was mainly to be friends together, so we spent a lot of time in the accommodation.
G
Gautier
5/5 nov-2022

Hosted at Casa Pequeña Lo Ferré
We have spent three days in the Lo Ferre house with our pet and although you always have to try things out to give your opinion, believe me when I say that you can book online with your eyes closed. An absolutely equipped house, decorated in detail, comfortable and impeccably clean. We have felt at home. The location is perfect, with parking areas 50 meters away. All this, together with a fabulous natural environment, has made us spend a wonderful weekend in October.
J
Jorge
5/5 nov-2022

Never-ending natural spaces, vast nature, monuments and the perfect representation of the most famous inhabitants from prehistoric times, are some of the elements that are part of the Teruel's territory. Located in the north-east of the Iberian Peninsula , it is composed of a very picturesque orography and landscapes, typically inland Mediterranean, which makes this province an ideal place for rural tourism in Teruel. You will find here the mountain of Albarracín, the mountains of Bajo Aragón and the Depresión de Teruel, as the main representatives of the great variety and richness of its nature.

From the strong Medieval character of Albarracín, protected by the majestic shadow of the mountains where cave paintings, the city walls, and the bank of the river Guadalquivir co-exist, to the local architecture as the result of the Mudejar influence which decorates hundreds of historical buildings, medieval historical centers and ancient castles and monuments, you will find in this province some many things that won't leave you indifferent.

This is the same land that the famous Spanish warrior El Cid Campeador treaded, and which we can also help you tread offering you a great selection of accommodation in this province.

And if you love eating, a nice plate of ' migas turolenses' or Spanish cured ham are some of the dishes you must try if you want to make the most of this province. And you will discover how the kindness and familiarity of the people from Teruel will be the icing on the cake of your stay in this province.

What to see in Teruel?

Teruel is one of the lesser known provinces of Spain, but one which has many elements that make this a great destination to explore and discover.

There are many places here that will give you a glimpse of the culture, history a and tradition of this province.

It is located in the south of the Spanish autonomous community of Aragón, and you will find along its territory many monumental instances that will tell you about the Mudejar past and influence in this region. The climate in Teruel is dry and cold during winter, but the temperatures are softened little by little until the calendar reaches summer. Spring in Teruel is the time of the year when it rains the most, and also when the beauty of the landscapes reaches its peak.

What curiosities are there in Teruel?

Teruel is a place of many urban contrasts which, together with the landscape, will provide with some spectacular views.

This is province is one of the main representatives of Mudejar art and architecture, a style that was typical of the time the Muslim communities lived in Spain under Christian rule, and which here you will find in many UNESCO world heritage sites, with four out of ten of them located in the capital of the province.

This is the province where the legend of the two most famous lovers took place, and which will make for an ideal destination for your holidays, offering you a great variety of activities to enjoy both during the day and at night. 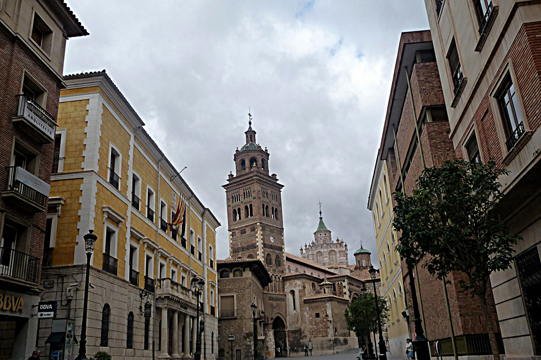 Where to stay in Teruel?

In the province of Teruel you will find many towns and villages where you can stay and enjoy of something more than just the capital. You will see this other side of the province will make for the perfect destination to stay, and explore the rest of the area. You will als be able to visit magical, natural spots, and many other elements that have made this region the perfect one to get some rest, and enjoy of many touristic activities.

The capital, Teruel, isn't very far from the rest of the province, which means that if you are staying somewhere else, you will be just a short drive away from the city.

One of the most beautiful locations in this region is Albarracín, a small town standing at 1,200 metres above sea level, and which has still many remnants of its past as military defender of the region.

Calaceite is a place full of character and tradition, so much so, that is entire historical center has been declared Historic-Artistic heritage grouping, as well as a place of high cultural value.

The natural views and landscape in Rubielos de Mora are spectacular thank to its privileged location in Sierra de Gúdar Javalambre. Leave the rest to the traditional ancestral homes and the impressive palaces that you will also find in this spectacular small town. 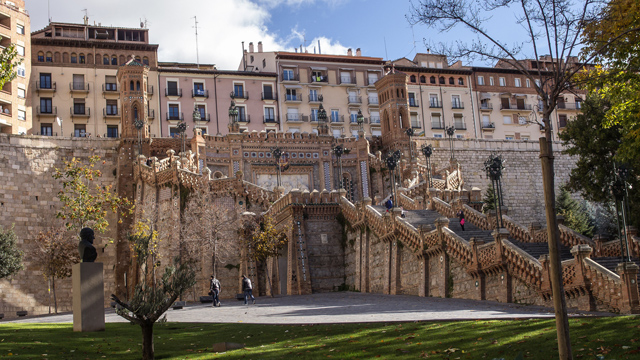 What to do in Teruel?

There are many things one can do in the province of Teruel, many landscapes to discover and many other elements connected to the history of the this region that you will be able to visit.

If you are coming to the city, the first thing you need to do is enjoy of the views from the flight of steps at the very center of the city. This neo-Mudejar building will offer you the most majestic views of the whole city.

You can easily recognise Torre de El Salvador from a long distance, since it is one of the tallest monuments of the entire region, and has some traces of Mudejar influence in its architecture. Another important monument is the Plaza del Torico, the place where the locals are usually gathered together, specially during the local festivities. From this spot, and going down some stairs, you will encounter several water cisterns from the Middle-Ages.

The cathedral and the aqueduct, as well as the mausoleum dedicated to the Amantes de Teruel, are other places that we also recommend you visit if you come to the capital of Teruel. 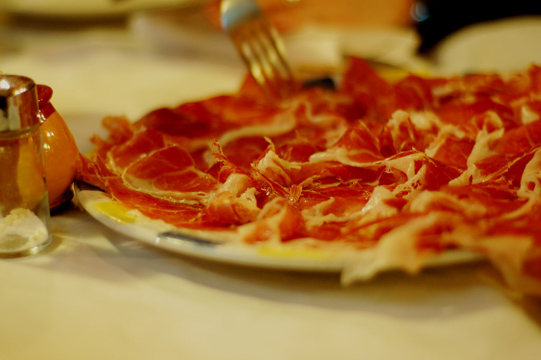 What to eat in Teruel?

The gastronomy of Teruel offers some true delicious dishes. You will love this part of your visit, which will also allow you to learn about its culture by means of its more traditional recipes and local products.

Of Aragón's cuisine, it is perhaps the most humble and simple, with a predominance of meat products that are elaborated with vegetable produce, sometimes even with sauce or, simply roasted. If there is something characteristic of Teruel's gastronomy that is how here pork is used in many differents ways in its dishes, with its PDO Spanish cured ham being the jewel in the crown, one of the local delicacies of this region. Garlic soup is also a traditional dish eaten in this province, as well as some local vegetables like peppers, frequently used as the basis of 'sofritos'. Saffron from Jiloca is one of the main local products you will find here, together with black truffles, both of them very worthy and quite difficult to find.

Amongst the local confectionery, you will find here sweet delicacies with the most poetic names, such as 'suspiros de amante' (lover's sigh), which are small, cheese pies, or 'pan dormido', and 'tortas del alma'. 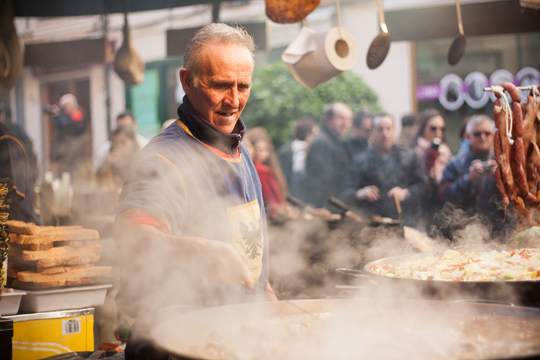 Where are the Teruel festivities?

If you are coming to Teruel and would like to join in the local festivities, you will be glad see this is also one of the bets ways of getting to know a place and its people, and enjoy of the culture, heritage, gastronomy and customs that are exhibited during the most important occasions here.

Starting with the month of January, Teruel celebrates its regional festivities organizing very singular activities, such as La Encamisada, in Estercuel, a procession celebrated on January 19, during the festivities of the Sanjuanes, which is one of the oldest traditions. Las fiestas de Las Bodas de Isabel de Segura are celebrated in the capital, commemorating the marriage of the Lovers of Teruel.

Las fiestas de San Sebastián, held in the small town of Castelserás, are also one of the most important local festivities during which traditional dances and music are performed by the light of the bonfires.

How much does it cost to rent a rural house in Teruel?

What type of housing do travelers usually prefer to sleep in Teruel?

When are reservations made in Teruel?