The BEST country houses to rent at Palencia

We have an average score of 8/10! See what they think of our properties in Palencia

Hosted at La Tila
We recently went to spend a few days in September at La Tila 7 friends and we loved it. It is decorated with an exquisite taste and Elena is magnificent. The only fault is the kitchen, which is not very cute, but the rest is incredible. The garden is amazing and the holiday home is very good. We were not cold at all, nor did we lack anything. In addition, the roads in the area are very good. Too bad it rained and we didn't enjoy it 100%.
M
Matías
5/5 dec-2022

Hosted at Casa Montes
An ideal place to disconnect in a very pleasant and comfortable stay. We stayed for a weekend in November and despite the fact that the outside temperature was very low inside there was a very inviting warm feeling. The fireplace adds the romantic touch. Isolated accommodation without a single rurido, especially at night genail rests. Very clean, natural environment with many places to visit and impeccable treatment from your hosts.
A
Ana Belén
5/5 dec-2022

Hosted at Casa Montes
If we had been guided by the previous opinions, we would not have known one of the best rural accommodations in which we have been. We stayed at Casa Montes and everything we can say is positive. The holiday home is very well equipped and we do not miss anything. We were able to enjoy the patio with the children and the walks through the surroundings of the town were great. But the best is the attention of Rosa and Tino always ready to solve any problem and guide us to discover a wonderful environment.
Y
Yaquelin
5/5 dec-2022

Hosted at El Encinar
I can only praise the rural house El Encinar and its owner. The truth is that we feel at home. At no time did we lack anything. The accommodation is very nice, cozy and perfectly winterized. The town is very small, but the setting is fabulous, the rock is impressive, next to the mountains. If you are looking for tranquility and relaxation, this is a perfect place.
A
Armando
5/5 nov-2022

Hosted at El Encinar
We have spent the weekend two couples with 5 children and I have to recommend this rural house one hundred percent. For the capacity that the space has, it is spacious, everything very new, clean and well cared for. The owners provide everything that is needed with total kindness. It has been very cold outside but in the accommodation we were in short sleeves, they did not skimp on heat, and firewood was available, in our case we did not even light a fireplace.
A
Angélica
5/5 nov-2022

Hosted at El Encinar
We came from the north and we have spent the first half of August in the rural house. And it was not the last time! We are delighted. We really enjoyed our vacation. You can do thousands of things in this peaceful environment such as hiking, bathing in the swamp, cycling, playing with the accommodation's dog and cats and talking to the people in the beautiful surroundings. We repeat!
A
Arabela Maria
5/5 nov-2022

Castilla y León, in the northwest of the peninsula, is not one of Spain's most popular destinations, so much so that its gorgeous and immense cathedral is known as the “beautiful and unknown”. As the regional hymn of Palencia says, you will find here mountains, valleys, plains and meadows, that will make nature-lovers fall in love with the diversity of this place.

Tierra de Campos is witness of the quiet, tranquility of this province, away from the frenzy of urban, city life. And the truth is that, little by little, this province has grown to become one of the main destinations for visitors who come looking for a place to do rural tourism in Palencia.

One of the reasons for this, is the capital, where the shapes and colours of the local architecture never fail to charm art-lovers. You will find many examples of medieval art in Castillos, and a peaceful retreat in the visigoth temple in San Juan de los Baños.

Although it might seem a problem, or a relief to some, those who intend to hiking to the Pisuerga or join walking a part of the pilgrimage of Camino de Santiago will feel completely new once they try the delicious typical roast dishes prepared in a wood-fired oven. And to those who would like to know a thing or two about architecture, you will find here the largest collection of historic buildings built in the Romanesque style, in Europe.

And if you think you will like the capital, then you will be completely mesmerised by its surroundings, such as the National Park of Fuentes Carrionas, where bears and Romanesque art live. It is also the familiar homely air in here, that has made this province an ideal destination for hundreds of tourists who have chosen this as the destination of their rural stay. So, are you coming too?

What to see in Palencia?

Discover Palencia, a traditional Castilian province with much to tell. You can see the relevance this province has hadin history in its monuments, especially those built in Romanesque style: churches, bridges, and palaces fill the historical center both in picturesque small towns and in the capital, where you can visit Palencias's cathedral, also known as the “Bella Desconocida” (the beautiful unknown). Following the waters of the Canal de Castilla, or walking up to the Cristo del Otero are some of the activities that we recommend, without forgetting to visit either the museums you will find here, such as the archaeological museum, the diocesan one, and the museum of contemporary art, as well a the many gardens and parks. A very lively and busy cultural and tourist offer for all tastes, and a gastronomy that has recovered the purest essence of the traditional recipes of Castilla, conclude a long list of reasons to visit this province.

What curiosities are there in Palencia?

Palencia is known for being the Spanish city with most parks per person, and the second one in Europe, only beated by Amsterdam.

In the 11th century a school was founded next to the city's cathedral, later becoming the first university in Spain. 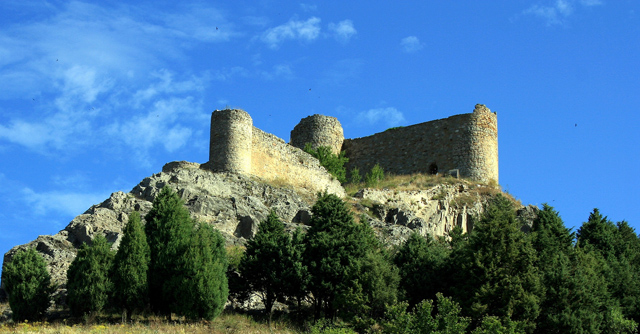 Where to stay in Palencia?

The historical center of Palencia is divided into different quartiers, each of them with its own distinctive character: in Centro-Catedral you will find the majority of historical monuments; in Centro-La Puebla, one of the biggest ones, you will find the Palencia's city hall and the Plaza Mayor; in Centro-Salón de Isabel II you will be able to enjoy of a romantic and intimate atmosphere and many parks to see the sunset; and in Centro-San Pablo you will find a beautiful network of charming narrow streets and alleys.

But if you're looking for a place to enjoy of some peace and quiet, the small towns and villages scattered around the province are your bets bet. Amongst the most beautiful of them are Ampudia, known for its typical Castilian streets, Carrión de los Condes with its medieval historical center, and Aguilar del Campo, a must if you interested in learning more about Romanesque architecture in Palencia. 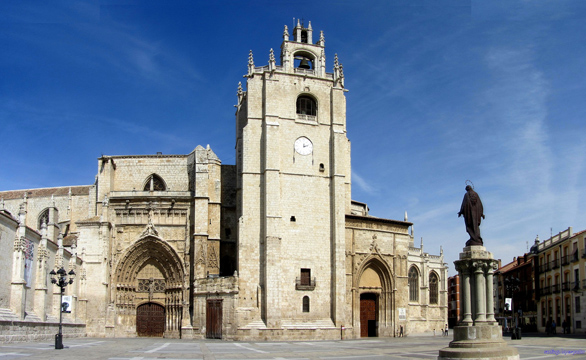 What to do in Palencia?

Without question, visiting the Cristo del Otero is the most popular activity visitors like to in the city, and no wonder why: 21 meters tall, make this construction one of the tallest Christ representations in the world, and it is also a great viewpoint to see the whole city. But Palencia is much more than that: if you walk around the historical center you will discover San Antolín cathedral considered a Spanish National Monument, a few Romanesque churches and convents, and many bronze sculptures and monuments.

The Canal de Castilla crosses the whole province, one of the most notable examples of water-supply engineering in Spain, from the 18th century. You can cross it by boat, and enjoy of the beautiful views of the nature around it during it. Without leaving nature behind, this area is also home to two natural reserves: te natural reserve of Fuente Carrionas y Fuente Cobre-Montaña Palentina, in the north of the province; and Laguna de la Nava de Fuentes, a perfect spot for bird-watching. 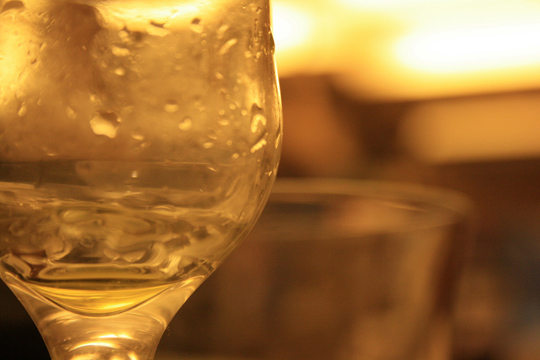 What to eat in Palencia?

Being a province of Castilla y León, the gastronomy of Palencia recuperates the essence and flavours of the traditional Castilian gastronomy. Wood-fired roast meals are the most popular, traditional recipes here, and it uses young lamb as its main ingredient. During the coldest months, there is nothing like warming up with a 'sopa castellana', and 'cocido', the latter recipe dating from the 17th century. Vegetables are also an important part of Palencia's cuisine: the peppers from Torquemada, onions from Palenzuela, or the kidney beans from Sardaña, are some of the representatives of the local vegetable produce. The great number of monasteries in the area is reflected on the variety of typical sweets and confectionery you can find here, such as the biscuits from Aguilar del Campoo. To complete such an splendid meal, you can have a glass of 'aguardiente de orujo' and any other of the local liqueurs that are typical of this province. 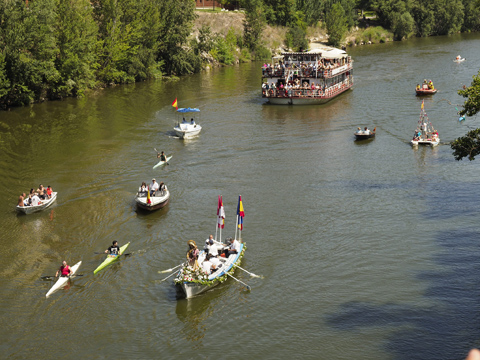 Where are the Palencia festivities?

Even though it is not one of the most popular ones in Spain, Easter here is considered an elegant, simplistic and sober festivity, so much so that it has been recognised as a being if International Tourist Interest.

But it is not the only important one here: the river descent of the Descenso Internacional del Río Pisuerga, held in the second sunday of August in Alar del Rey, and the international boat race of Carrión, celebrated the 14th of August in Velilla del Río Carrión, are two of the most popular sport events celebrated in this province, that are also of National Tourist Interest.

To add a final musical touch to these celebrations, try to spot the traditional 'jota' dances and 'dulzaina' players, that usually entertain the people and brighten up the streets, of any special occasion.

How much does it cost to rent a rural house in Palencia?

What type of housing do travelers usually prefer to sleep in Palencia?

When are reservations made in Palencia?