The BEST country houses to rent at Navarre

We have an average score of 10/10! See what they think of our properties in Navarre

Hosted at Casa Uyarra
We were occupying the house between August 15 and 22, and we really enjoyed the stay. It is very well equipped with a significant number of bathrooms, in addition to the outdoor pool where you have the sun until the afternoon, when it starts to fade with that pleasant feeling. The house is very large and with all the charm of being a very robust and "real" house, of which it seems that there are no more.
J
Jaso
5/5 dec-2022

Hosted at Las Gemelas
Do not hesitate to rent it. We are regulars on rural tourism vacations and after visiting many rustic homes out there that are sold as the eighth wonder of the world, this house is great in all aspects. A 10 will charm you.
M
Marta
5/5 dec-2022

Hosted at Casa Martintzenea
We have been in the constitution bridge a group of 6 adults and 4 children, and we have loved the house, very spacious and cozy, the treatment with the very nice owner, we had no problem. The town is very beautiful and from there you can make very interesting excursions to Zugarramurdi or Bertiz. It has been a wonderful experience. We will surely return because it has seemed very cheap.
F
Francisco
5/5 nov-2022

Hosted at Casa Aldalurberea
Happy holidays we have spent a group of lifelong friends during the Immaculate Bridge. The area is perfect for hiking trails in the mountains and we've been lucky with the weather. The accommodation is very nice and clean and has a fireplace for winter. We will return in spring because we have really enjoyed the environment.
L
Lucia
5/5 nov-2022

Hosted at Casa Errebesena
We were 2 friends to be alone in the Navarrese Pyrenees at Easter and the stay exceeded our expectations. The house is huge and very beautiful, it is like an old palace that does not lack detail, super clean and comfortable. Calm. The best treatment from Mila, the owner. Born in Espinal, a woman with concerns and with a lot of knowledge. The history of the house is worth asking. Very happy.
A
Antonio
5/5 nov-2022

Navarra is a land of traditions, of deep-rooted culture, and of experiences that, here, we can help you organize with a selection of accommodation where you will feel like you belong.

A neighbouring province with France, this region is in the north of the Iberian Peninsula. An area where both Spanish and Basque culture reside, and where one language is spoken more than he other.

We are talking about a place full of history, both real and less so; home to many legends of witchcraft and of the famous 'akelarres' that were celebrated in the cave of Zugarramurdi, located in the north, and also home to mountains such as the part of the Pyrenees that belongs to Navarra and, on the other hand, the plain where the you will find natural spots such as the Selva de Irati, the mountains that give way to the pilgrims who chose to follow the Francés stage of the pilgrimage of Camino de Santiago.

Pamplona, its capital, welcomes thousands of intrepid tourists who run down the famous Calle Estafeta during the running of the bulls in San Fermín, although places like Ochagavía, in Valle de Salazar, the impressive castle of Olite or Tudela, famous for its gastronomy, will also offer you an unforgettable experience.

One of the most important natural spaces here is the Selva de Irati, a huge land extension of pure nature where you can walk around and discover some of its hidden, magical spots. Are you ready to do rural tourism in Navarra?

Try the local cuisine if you're thinking about joining the world-renown San Fermines, but get to know also the kind and amiable people from Navarra. This is, without question, a region where you can spend a few days steeping yourself in the local flavours, landscapes, and culture.

What to see in Navarre?

Navarra is a region of many contrasts, noble and wit a very extensive historical heritage, in which you can still see some traces from its past. You won't be missing here an of the key elements that make for the perfect tourist destination: beautiful landscapes, a rich gastronomy, and a panoramic view that you will want to immortalize with a camera, over and over again.

From Roncesvalles to the city of Viana, Navarra offers many different things, and an air of tradition that you need to see for yourself.

Steep landscapes coming from the Pyrenees, and soft, green plains that come up to the Ribera, are some of the natural elements that you will be able to discover during your stay.

Each season of the year, you can find in the land a colourful experience worth admiring. A white, cloak of snow during winter, that leads to the spring thaw. And in summer, party after party, to finally attend the colour festival that takes in autumn.

What curiosities are there in Navarre?

Navarra is located in the north of the country, very close to where the ancient region of Aquitania was. At the same time, it is a region whose charming nucleus is protected by the regions Aragón, País Vasco and La Rioja.

In its confines you will find, apart from an extensive natural patrimony and the different towns and villages that make up this region, two main different parts: a part of Navarra next to the Pyrenees, a place with abundant natural wilderness and great land extensions; and the area of Ribera, with its more flat land except from a small mountain here and there. These two areas are separated by the mountain range of Sierra de Codés.

All of the above, gives way to one of the most beautiful areas in the whole country, and also to its very rich gastronomy, another key element of this region. 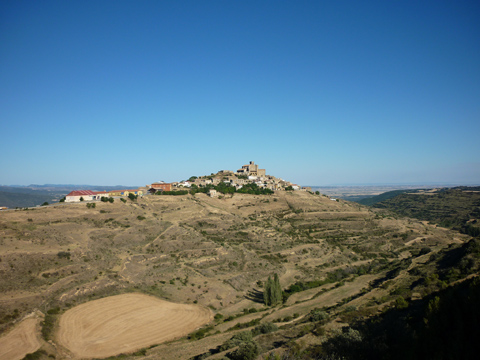 Where to stay in Navarre?

Navarra is much more than the so famous Sanfermines and the city of Pamplona, even though these are the two main tourist attractions.

We must let you know that rural tourism is slowly taking the reins of the majority of the tourism in this area, thus introducing to visitors the impressive, magical beauty of the towns scattered in the region, both in the highest parts, as well as in the plain in la Ribera. Some of the locations that we would like to recommend you are utmost examples of the more traditional Navarra, which have preserved the essence of tradition in this region.

One of the most popular destinations here is Olite, which was founded during the reign of Charles III of Spain, and which provides one of the most postcard-like views of the province: the Palacio Real. By the church of Santa María la Real you will also find a village full of true medieval character.

Ochogavía is another of the places we recommend for its postcard-like views, with its riverside houses, made mainly with stone.

One of the stops of the pilgrimage of Camino de Santiago is in Roncesvalles, always open to visitors and also a place full of contrasts.

But if we are talking about beautiful places, we mustn't forget to mention Ujué, a small town that also works as a viewpoint, and where you can see some of the most spectacular views of the province.

On the other hand, if you also want to enjoy staying in the capital we recommend you start looking for 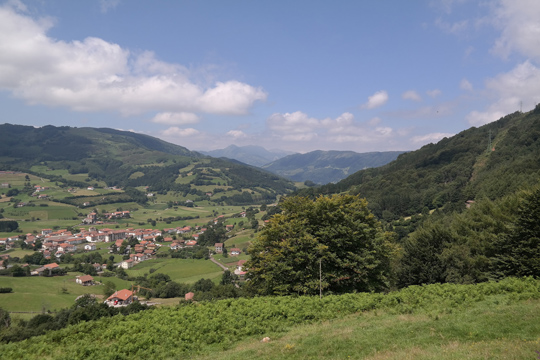 What to do in Navarre?

There are many things to explore here in Navarra. You can find here a large number of tourist and cultural options that will allow you to discover a place full of history and legends.

There are options for nature-lovers, history-lovers, and for those who would prefer to enjoy of a more cultural visit.

Amongst the first ones, we find the Nacimiento de Urederra, a true natural gem that you cannot miss, and which holds a great number of elements that have made of this natural place one of the most relevant ones, and of the highest natural value in the country. If you're looking for more quiet place that is close to nature, you must visit the thermal baths Baños de Fitero, which have been visited by important figures such as the Spanish writer Gustavo Adolfo Bécquer.

Amongst the other elements that remind us of Navarra's medieval past, you can find the palace or castle in Olite, and the castle in Cortes. And amongst the ones that indicate its religious tradition are the monasteries in Irache and the one of La Oliva, and the chapel of Santa María de Eunate.

Older than Middle Ages are the archaeological findings from the Roman times that can be found in Andelos, near the town de Mendigorría.

And, of course, to finish with the perfect cultural visit, Calle Estafeta in Pamplona is one of the busiest ones in the region during the Sanfermines, which are worldwide famous. 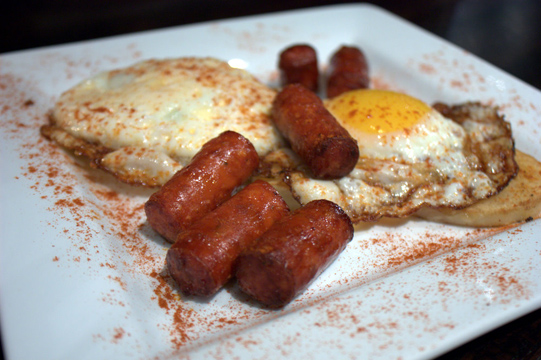 What to eat in Navarre?

Navarra's gastronomy can't be understood without the influence of its neighbouring regions. The influence of the gastronomy from Aragón, País Vasco and France, together with the local essence, have filled Navarra's recipe book with an endless number of dishes where great contrasts of flavours are met.

Just like its geography is divided in different areas, so does its cuisine, depending on where you are staying and the local products you can find. Meats such as beef and lamb predominate in the areas near the mountains, and deriving from them are some of the most popular local cheeses, such as the Idiazábal, and Roncal PDO. Curd and cottage cheese are also some other key local delicies.

From the middle part of the province we recommend the local vegetable produce, together with mushrooms and truffles, the star product of Navarra's gastronomy. Other loca vegetable products include asparagus, or peppers, the main ingredient of many recipes.

To finish this gastronomical journey, the cuisine of the area of La Ribera is a mixture of the colours, red, green and yellow, and of vegetable products that are combined and served with some of the best local white and red wines. 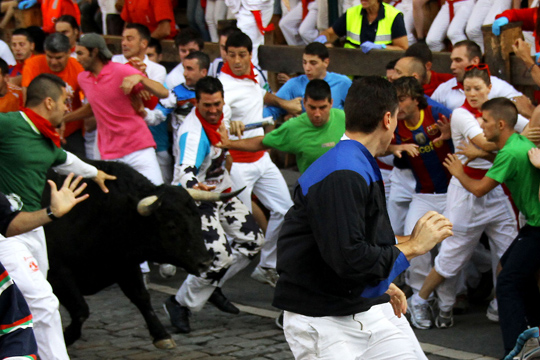 Where are the Navarre festivities?

Navarra is a place of many traditions and festivities, where you will be able to enjoy of its longtime traditions and culture, with plenty of special occasions that will be the perfect excuse to move around the province and learn about its history.

The festivities celebrated in San Fermín are, without question, the main festivity of Navarra par excellence. Worldwide famous, it welcomes thousands of visitors every year that come to enjoy of its bullfighting tradition, and of the running of the bulls, its music and its gastronomy each 7th of July. 7 The 'romerías' at the beginning of spring are also a popular celebration in this province that you will be able to join in places like Ujué, Roncesvalles and Labiano amongst others.

And just like everywhere else in Spain, Easter is also celebrated widely and passionately in Navarra, which means that you won't miss the chance of having a closer look at this event during your next holidays.

How much does it cost to rent a rural house in Navarre?

What type of housing do travelers usually prefer to sleep in Navarre?

When are reservations made in Navarre?