The BEST country houses to rent at Jaen

We have an average score of 9/10! See what they think of our properties in Jaen

Hosted at La Laguna de Maíz I y II
We have passed the Pilar bridge with our dogs Java and Seda and we are already thinking of going back. Cazorla is a paradise and the holiday home is located in a perfect place to get to know both the towns in the area and the Sierra. The house is perfectly equipped and heated. We, Java and Seda, have really enjoyed the garden. The owners are very nice and attentive.
B
Borja
5/5 -2023

Hosted at La Laguna de Maíz I y II
Weekend to disconnect from everything in a home immersed in nature and in a perfect environment to find the most absolute relaxation. Very complete, beautiful garden with a swimming pool that is wonderful and with a very successful interior decoration. The comfortable bedrooms with brand new mattresses, a fireplace in the living room very much in keeping with the array of features and in short, a perfect place to meet yourself. From the same accommodation there are several hiking routes.
M
María del Carmen
5/5 dec-2022

Hosted at Mirador de Hornos
We decided to spend a few winter days specifically in January in this rural house in Hornos De Segura, an idyllic place for nature tourism. It is located in the vicinity of the Natural Park and very close to the Trabanco reservoir. We have not been cold at all because the room keeps the heat of the home very well and that the rooms are quite large. Outside the accommodation, children can run around without worries and although it does not have WIFI, we have not missed it, finding that total disconnection so necessary today.
J
Jon
5/5 dec-2022

Hosted at El Mirador de la Luna III
We stayed for a weekend in November in this accommodation located in Hornos del Segura, it is a charming town that cannot be better surrounded by nature, since it is located on the top of a mountain at the foot of the Tranco reservoir and borders the Nautral Park of Cazorla and the Sierra del Segura. The rural complex is beautiful and consists of several very cute and well decorated accommodations, since it is all renovated and they have given it a modern style but keeping the traditional. The rooms were very comfortable and we had a fireplace and heating.
J
Jennifer
5/5 nov-2022

Hosted at El Mirador de la Luna I
The best of the accommodation as everyone comments in the opinions are the incredible views that they have of that natural paradise in which it is nestled, Segura de la Sierra, a visual pleasure that is difficult to forget. But if it still fits, the treatment of the owners who are a love is better, in my case I was injured and they allowed us to stay on the ground floor and only charge us for the two people who were going. We will be back for a weekend in the summer.
J
José Luis
5/5 nov-2022

When we say Jaén, olive oil instantly pops up in your mind. Because this province from Andalucía is the cradle of Spain's liquid gold, the essence of Spanish gastronomy. But not only that. This province is also home to a great variety of historical monuments, and where you will find an oasis of peace, such as its Periurban natural space.

The many rural and natural spaces here are also one of the main attractions for visitors, offering a quiet and peaceful paradise, and a place to escape from the frenzy of daily life. In this sense, one of the natural highlights of this area is the Sierra Mágina, with its impressive orography, and the mountains of Sierra Castril, where you will be able to take a break by the banks of the river, two great options if you decide to stay and do rural tourism in Jaén

Baeza and Úbeda are some of the most representative destinations, often visited for their historical monuments, considered UNESCO world heritage sites.

What to see in Jaen?

Welcome to Jaén, a green country with a great number of natural spaces that are assembled in some of the most spectacular panoramic views.

This is one of the provinces Andalusia, in the northeast specifically. You can find in its inland territory, apart from great natural spaces, many remnants of the its historical and cultural legacy, with two cities the historical complexes of which have been declared UNESCO world heritage sites.

Jaen is also a province with a very wide tourist offer, both for the day and nightlife, when the streets are alive with youth. During summer or in winter, this province opens its doors to thousands fo visitors that come every year to see it wonders. It is, without question, the perfect destination forth both short and long term stays.

What curiosities are there in Jaen?

This is a charming region, where you will be able to explore in depth all the magic hidden in it, which is the result of a combination of the history, culture, nature and excellent gastronomy. From the latter, we must let you know that is Spain's land of olive oil and Spanish ham par excellence, which makes experiencing the local gastronomy one of the main attractive aspects of this destination.

Apart from its historical heritage, with a predominance of monuments from the Renaissance era, you can also visit here the many castles that have been watching over the towns and villages for centuries. There is, in fact, the option of visiting all of them if you do the Ruta de los Castillos y las Batallas, where the history of each of them is explained in detail.

On the other hand, and for nature lovers, here you will have a great variety of offers that will enable you to explore up to four natural reserves, and the mountains, which have impressive views. 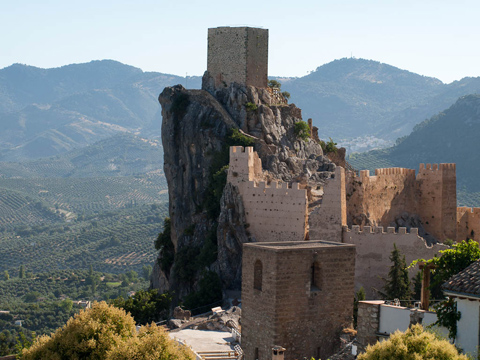 Where to stay in Jaen?

Staying in Jaén, means doing so in a place full of history and places to visit. Both in the capital as well as in the nearby cities, towns and villages, they will reveal something about the history of Spain.

In the capital, you will most of the accommodation offer in hotels, which are fully booked more often than not, specially during spring and summer, which means that you will have to search accommodation in advance if you're travelling during that time.

But one o the experiences that we recommend the most is enjoying of a rural stay in one of the many accommodations scattered in the small towns and villages around the province. The best option to enjoy of this is, to begin with, the small town of Baños de la Encina, which has the oldest castle in Europe, Burglimar, offering one of the most spectacular views of the monument, especially at night when the city walls are illuminated.

The fortress of La Mota is one of the most famous ones in the whole country, in Alcalá la Real, a place full of history and where many important figures have left their mark on it, such as the Arcipreste de Hita, amongst many others.

We also recommend La Iruela, specially to nature-lovers, a place where they will find one of the best ways to access to Cazorla, Segura & las Villas Natural Park. A truly spectacular place.

What to do in Jaen?

Jaen's landscape is one of the landmarks of this region: the immense field olive fields that tinges its postcard-like landscape and towns, with green. This is why those who are looking to engage in a more active tourism can enjoy here of the different hiking routes and mountain paths that you will find in this area.

Visiting Úbeda and Baeza will allow you to discover two of the most important cities of the region. So much so, that they are both UNESCO world heritage sites because of their beauty and the good conditions in which their treasures from the Renaissance era, have been preserved. To learn a bit more about its history, you can also visit some of its museums, such as el Museo del Aceite y el Jamón, two of the main economic activities of the province.

Back in the capital, you can visit the castle of Santa Catalina and the cathedral, two of the most important elements of the architecture of the city that mustn't forget to visit. For a slightly different visit, we must let you know that there is also a desert in Jaén,the desert of Larva, which is one of the lesser known deserts in Spain. We recommend, for this very same reason, that you check it out. 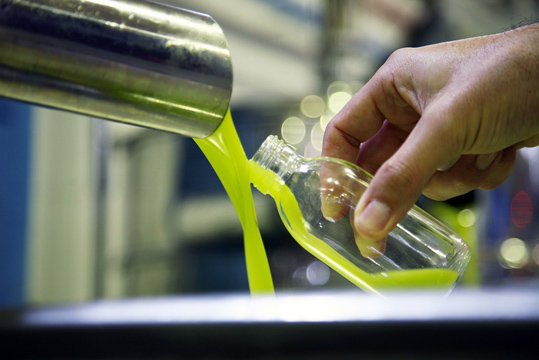 What to eat in Jaen?

The gastronomy of the province of Jaén is, like the rest of Spain, the result of a combination of cultures and invasions from other civilizations throughout history, and which have left their mark also in the local cuisine.

What everyone know is that, none of the local recipes can be understood without their precious olive oil, the main protagonist of this province.

All of the local dishes contain this ingredient, preserving thus the essence and tradition of Jaén's past in the elaboration of them.

Getting to know the local gastronomy means trying the true taste of Jaén, where vegetables and game meat dishes predominante.

Some of the traditional recipes here are the 'andrajos' a dish inherited from the humble and agricultural roots of its people elaborated with a vegetable sauce and a main ingredient that can be either cod or rabbit.

You will also find rabbit in other dishes such as 'guilindorro', or the 'galianos'.

As an appetizer, there is a very common dish here called 'ajo atao' made of potatoes, olive oil and garlic that you should definitely try. As for dessert, treat yourself with the sweet delicacy of 'panecillos de leche, a very typical dessert eaten in Easter. 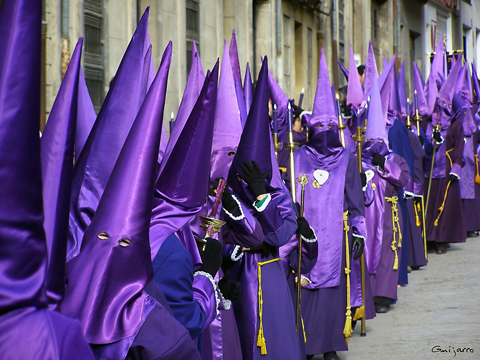 Where are the Jaen festivities?

There are many festivities to celebrate in this province, which will give you a taste of the culture and traditions of this region. They are, therefore, one of the best moments of the year to get to know the villages, folclore and, in general, the traditions from here.

Also, depending on where you're staying, you will see that the local traditions will be more focused on religion, culture, or just having fun.

The Romería de la Virgen de la Cabeza, in Andújar, is held to honour the patroness of this town, and it usually becomes crowded with faithful churchgoers that have been walking up the mountain of Cerro del Cabezo, ever since 1304.

Easter is everywhere in Jaén one of the most important occasions celebrated, and one where you will be able to enjoy of the true essence of the province. You will see it has many followers, and some of them foreign visitors who also join the locals in their celebrations, street parades and processions.

The Fiesta de Moros y Cristianos, which takes place during August, is another of the main festivities in the area of the natural reserve of Sierra Mágina.

You will find these, and many other things to celebrate here and that you shouldn't miss.

How much does it cost to rent a rural house in Jaen?

What type of housing do travelers usually prefer to sleep in Jaen?

When are reservations made in Jaen?