The BEST country houses to rent at Cordoba

We have an average score of 9/10! See what they think of our properties in Cordoba

Hosted at Cuevas del Pino- Casa Luna
Last weekend my partner and I came across this wonderful rural house. We spent three nights at Casa Luna, without the best place we've been so far. The adaptation of a house to a cave, living for a few days in a magical and cozy place, has undoubtedly been an unforgettable experience. So much so, that due to heavy rain, the light of the entire farm went out for a few hours, and Pilar, the owner of the house, told us that perhaps we would have to spend that night or those hours with candles until the light returned. .
A
Anxela
5/5 -2023

Hosted at Cuevas del Pino- Casa Lucero
My girlfriend and I spent a fantastic weekend at Casa Lucero, it is a unique place, surrounded by nature and a few minutes from Córdoba capital where we live. The accommodation is not wasted, it is a cave, and the simple act of having breakfast, watching TV or sleeping in such an environment is unforgettable. If you want to visit the province and are looking for something special, in a first-class natural environment, spend a few days in this accommodation.
M
Mazet
5/5 dec-2022

Hosted at Cuevas del Pino- Casa Sol
We have spent 3 days in June with our little daughters and a friend enjoying the comfort that Casa Sol offers you. They have had fun like crazy in the pool, and they have marveled at the cave. The tranquility that is breathed, make it an ideal place to rest, and spend unforgettable days with the family. Its strategic location allows you to make multiple 100% recommended excursions within a few kilometers, the castle of Almodovar del Río, the Sierra de Hornachuelos, etc.
A
Auxiliadora
5/5 dec-2022

Hosted at Cuevas del Pino- Casa Tierra
We have spent some wonderful days in the countryside and next to the capital. Our daughters have really enjoyed the surroundings, the pool and the friendliness of the owners and we couldn't have been more comfortable. It is a 100% recommended site for all those families who want to enjoy absolute rest and relaxation, but next to the wonderful city of Cordoba.
G
Gabriela
5/5 dec-2022

Hosted at Finca Buytron
Several friends were looking for a country house, field and not those imitations that have proliferated so much. But at the same time we wanted this tourist home to allow us to get to know Córdoba city and the southern part of the province. And that accommodation I can assure you that if you have the same interests as us, it is Finca Buytrón. Just five minutes from Montilla, the quintessential city of the Montilla-Moriles wine region.
K
Karmen
5/5 nov-2022

Hosted at Finca Buytron
At first we did not know whether to confirm the stay, but the treatment that the owner gave us by e-mail was fantastic and encouraged us a lot. We were my wife, my two children and other friends with their children and pets. Although the weather did not accompany the first day and the trip from the capital was long, the other days were very good, we were able to visit Córdoba without any problem and when we were in the vacation home the children had fun playing while we were in the living room with the fireplace.
C
Celia
5/5 nov-2022

By the river Guadalquivir and refuged under Sierra Morena lives the city of Córdoba. The province, once the capital of Hispania Ulterior during Roman times, has presented ever since then beautiful stone constructions such as the Puente Romano. But if we're talking about influence and flavours of this region, we cannot forget to mention the period in which Córdoba was also known as the caliphate or capital of the Islamic Emirate, thanks to which you will also find here beautiful mosques and zocos, Arab markets from that time, that surely won't leave you unimpressed during your stay of rural tourism in Córdoba.

But the historic centre of this is city is not the only thing worth admiring in this region, since you will also find many natural areas, so that you can enjoy doing rural tourism. The cork, and holm-oak wood are the typical flora in this region, and you will find plenty of them in the natural parks of Miraflores, and Parque Cruz Conde.

What to see in Cordoba?

Welcome to the South of Spain, in the heart of Andalucia, where you will find life lived to the maximum. This is, undoubtedly, one of the nicest places to visit in the south of Spain. A destination of very rich gastronomy, impressive historic buildings, small towns plenty of charm and baroque architecture, pueblos blancos, and natural parks and reserves one the banks of the Guadalquivir river.

All of the above makes this region that welcomes thousands of tourists every year, where they can enjoy of the impressive views of its olive fields, its rich heritage and, overall, of the true essence and character of Andalucía.

All fo this, accompanied by light, pleasant temperatures during most of the year, make of this a favourite destination, where you will also find leisure activities to enjoy of the perfect getaway.

What curiosities are there in Cordoba?

Córdoba is a place of pure essence, and also a place of magic. You will find hidden in each of its spots, hundreds of stories and legends, a well as peculiar things that you shouldn't miss out.

It's the biggest urban area that is a UNESCO world heritage site in its entirety, as well as the second biggest historic centre in Spain. As you can see, this is a place of high cultural and historical importance, as well as a charming destination.

Its territory goes from the Sierras Subbéticas, to the Valle de los Pedroches, and includes many places not only of natural, but also of cultural interest, through the ages, including also some impressive archaeological sites.

It is also one of the areas where you can see the best Arabic art of the peninsula in all its glory.

Where to stay in Cordoba?

Staying in Córdoba will guarantee that wherever you decide to stay, you will always allow you discover and learn more about the culture and history of Spain because each of its towns and villages tells a story worth listening.

During the spring and summer seasons, the gerta number of tourists makes finding accommodation more difficult, that's why we recommend you start doing so ahead of time so that you can choose which place is the best for you. The city of Córdoba will bring you closer to the main places of interest of this area, such as the Mezquita de Córdoba, or the Puente Romano.

Nevertheless, there is also a great number of towns like Bujalance which, apart from being considered a City and Historic-Artistic Heritage Grouping, you will also be able to take into its architecture from the baroque period, and of Arab influence.

Another town that has adapted perfectly to tourist is Montilla, which is also the winemaking capital of Córdoba. Baena and Montoro, and Priego de Córdoba are also great locations to stay, and get some rest for a few days, and enjoy of the true essence of this region. 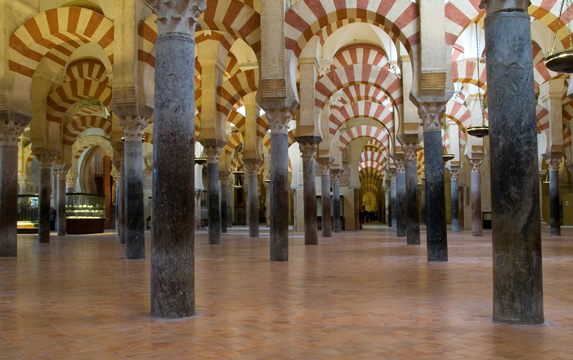 What to do in Cordoba?

This is a province with the biggest, and most varied amount of historical and artistic heritage sites in Andalucía. This is the reason why discovering each of its secrets would take you a very long time, but it will make sure you will want to come a second time to visit and enjoy of what you missed in your first visit to this province.

Due to its historic relevance throughout the ages, and after being invaded by the Romans, and being the capital of Al-Andalus in the year 929, up until nowadays, is reflected everywhere in its vast heritage.

Of course, one of the main attractions to visit is the Puente Romano, the unquestionable protagonist of the city's panoramic view. Once you cross this ancient bridge, you will find the Palacio de Congreso, and the Palacio Episcopal, which will give way to Córdoba's famous Mezquita Catedral, where baroque, gothic, and renaissance art are met. And before even being Córdoba's mosque, it was also a visigoth basilica. And you mustn't forget to visit the Patio de los Naranjos, and the synagogue either.

But if you're one of those who prefer enjoying culture indoors, then the Museo de Bellas Artes and the Museo Arqueológico are you place to go. 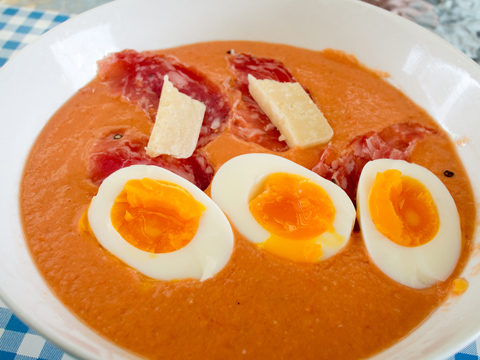 What to eat in Cordoba?

Cordoba's traditional dishes and cookery is the result of the typical gastronomy from Andalucíaa dn, of course, of the muslim tradition.

In their kitchens you will find some of the most renown recipes of Spanish cuisine, and especially nowadays with the use and spreading of the concept of ?tapas? thanks to tourism.

Córdoba's gastronomy is divided in two different kinds of traditional styles of cookery: on the one hand platos cortijeros inherited from the people who worked in the farms such as 'gazpacho', 'salmorejo', or 'migas' as their protagonists; and on the other hand the cookery linked with the traditional countryside style of life such as 'potaje'. It is also very common to find recipes elaborated with garlic, or saffron, which were techniques used in Arab cuisine.

Amongst the typical drinks from this region you can find vino amontillado, the most popular one n this region, so much so that there is a local festivity held in its honour. 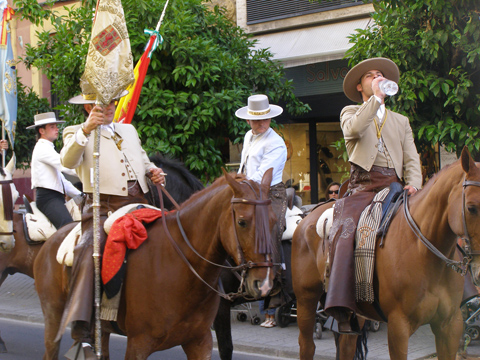 Where are the Cordoba festivities?

Córdoba is a province that never sleeps, and that has a very wide cultural offer that will help you enjoy to the most of the essence of its traditions and customs.

Visit the province during any of its special occasions of the year to enjoy of its festivities, since Andalucía is known for having a very lively and festive atmosphere during these days.

You can celebrate in the town of Priego de Córdoba the Fiesta de los Domingos de Mayo, which has been celebrated for more than 400 years, an occasion where you will be able to enjoy of every Sunday it is held, where its streets become full of life, music and tradition. And without leaving May, we can take part in the festivities of Lucena held the first monday of the month, when we can take part in the festivities honouring the Virgen de Araceli, patroness of this town.

The Fiesta de los Piostros de Pedroche, the Romería de los Gitanos en Cabra, the fiesta de la Vendimia in Montilla, and many more, are waiting for you.

How much does it cost to rent a rural house in Cordoba?

What type of housing do travelers usually prefer to sleep in Cordoba?

When are reservations made in Cordoba?