174 Country houses in Dordogne, France from 15€

Congratulations if you have chosen this place as a destination for your next holiday, as you will be able to enjoy the essence of France to the full.

A department located in the southwest part of the country where you will be able to disconnect between the smell of lavender and traditional villages. A department less stately than some others, but with a very wide range of rural tourism and above all, lots and lots of magic.

It owes its name to the river that runs through the area, and its capital is Périgueux, which is divided into four charming regions: Green, purple, white and the black Périgord. This department has as many colours as it has charming places and you will be able to enjoy them for a few days.

It includes natural spaces, cultural spaces, small villages surrounded by nature, and a gastronomy in which you will discover the original flavours of the area.

What to see in Dordogne?

Without a doubt, this department is one of the best options for a trip around France. A corner with a lot of charm where you will be able to enjoy the combination of spectacular valleys with an intense smell of lavender, rocky formations in which authentic charming villages have been built, or caves that will make you travel through the most beautiful underground part of the Dordogne.

It is also one of the areas with the most castles, having reached up to 1,000 castles, some of them being the most important ones in France, and with villages so beautiful, that it is one of the departments with the largest number of beautiful villages in all of France.

As you can see, it is undoubtedly a corner to be discovered, and this includes its gastronomy, very varied in terms of products, which are also of a spectacular quality and with a very recognized taste as is the case of the black truffle, or the typical wines of the city of Bergerac. In fact, many say that you don't know French gastronomy until you try the cuisine from Périgord.

What curiosities are there in Dordogne?

Visiting this department will take you a few days as you are in one of the largest departments in France, and specifically the third largest one, which makes its villages, full of cultural heritage, and its large natural areas a constant in your journey through the area.

In addition, there is much to do and to see, and you can even travel to the past by visiting the almost 150 archaeological sites with vestiges from the Palaeolithic period, 15 of which are listed as UNESCO World Heritage Sites. From the Vézère valley, you can see the gates of prehistory, as well as 25 caves where you will discover cave paintings. From the Vézère valley, the gates of Prehistory open.

It is a privileged place that will also make you feel like a king in its 1,001 castles that you can visit, or at least the most important ones, like the Château de Castelnaud.

Of course, there are charming villages, in fact 10 of them are part of the list of the most beautiful villages in France. Some of the most impressive are Castelnaud-la-Chapelle, Beynac or La Roque-Gageac.

And this is just a small taste of what awaits you in Dordogne. 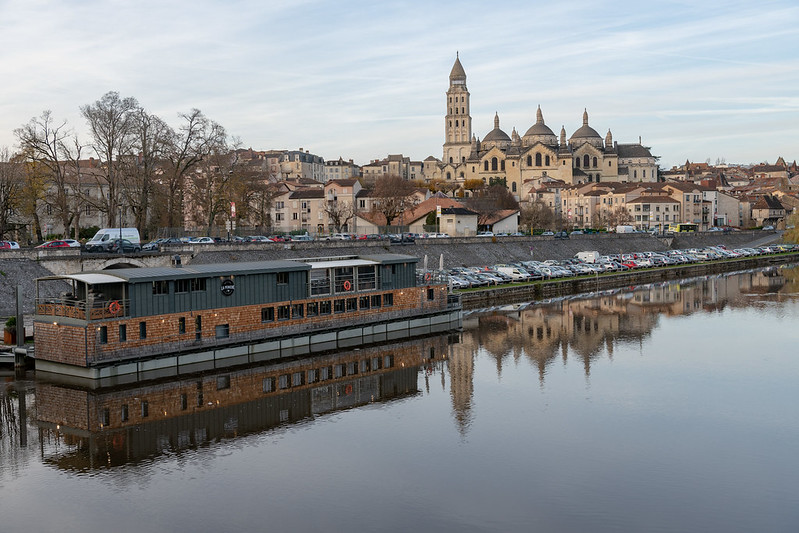 Where to stay in Dordogne?

There are many places where you can enjoy rural accommodation, in an incomparable natural and cultural environment, where you can rest and recharge your batteries in light of what awaits to be explored.

A good place to start could be Périgueux, a town with a long history of knights and princesses in a medieval atmosphere that will delight you. Moreover, together with Berguerac and Sarlac it is one of the French Cities of Art and History.

Sarlat is another of those cities where it is worth looking for accommodation. The road to it makes us feel the beauty that we will find inside, with its streets and buildings in yellow stone, and its traditional shops where you can taste the best cassis liqueurs, honey and cheeses.

Another curious destination where you can spend at least one night is the village of La Rocque Gageac, next to the Dordogne river, where you can also enjoy a lovely boat trip.

Rocamadour and Beynac with their imposing castles are charming destinations where you can enjoy rural tourism too. 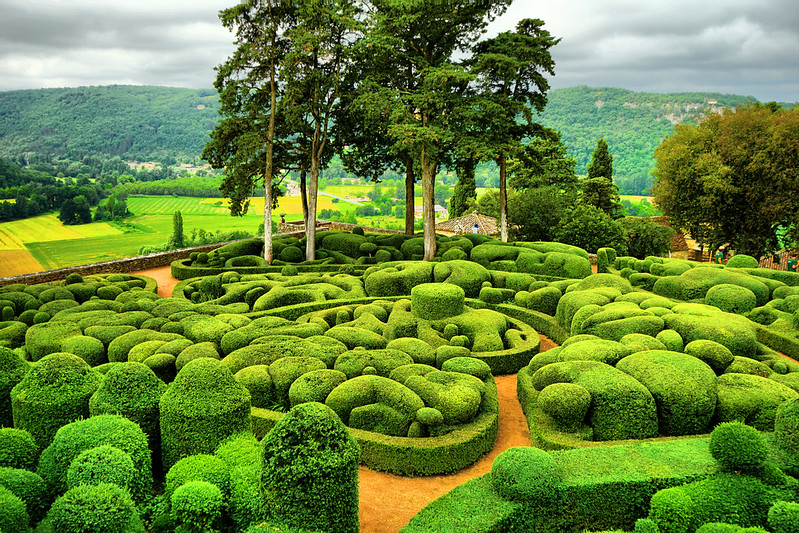 What to do in Dordogne?

We recommend that you recharge your batteries at your accommodation because there are many and varied activities available in the area.

Since you are in an area known as “The Country of 1001 castles”, we suggest that you take a route to see some of the most impressive, open to the public. On this route, the Château de Castelnaud, a historical monument, the Château de Beynac, which is also one of the best preserved, and the most austere, the Château de Combrand are three perfect options.

For those who like to see nature, we propose a trip to two of the department's emblematic gardens, those of Eyrignac and Marqueyssac.

But going down to Dordogne’s underworld, we find the famous Crystal Cathedral, which is a charming cave in which stalactites and stalagmites become one of the most spectacular spaces.

On the other hand, the Vézère Valley has a space to feel like a troglodyte: the Rocque Saint Christophe, a place excavated in the rock where different elements and photographs of life in prehistory are recreated.

Finally, and for those travelling with children, visiting the largest freshwater aquarium in Europe can be an event to include on your trip, where you will see everything from snakes, to lizards and iguanas, as well as doing many other activities.

What to eat in Dordogne?

It is often said that until you try a menu from this department you do not know French gastronomy in depth and this is very true. The wide range of flavours, colours and smells makes it one of the richest cuisines you will find in France.

Its menus are full of typical products of its agriculture, such as strawberries that can be eaten in their natural state or in compote, to sweeten its desserts.

Without a doubt, the star dish of the area is foie gras, which can be made from duck or goose, which is why it is very common to see many farms where these animals are looked after. It is one of the most desired delicacies by travellers, and there is a whole culture around foie gras.

Another product that you should not miss is the truffles that usually accompany some of the local poultry dishes.

Walnuts are another delicacy that is used to prepare various dishes. You can find them in liqueurs, cakes, desserts and salads to which they give a very characteristic touch of Dordogne.

Finally, you can't forget to enjoy a good wine, with special attention to the Bergerac wines, which have a designation of origin and are the main production area of these rich wines. 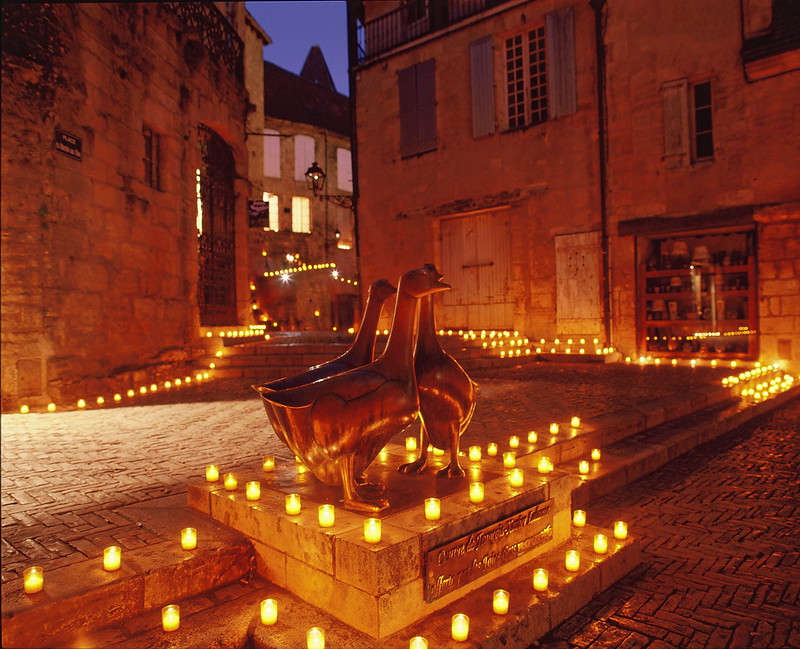 Where are the Dordogne festivities?

As it happens in many regions and departments of France, the festival is very much linked to the gastronomy of the area. During the whole year there are a lot of celebrations in different towns and cities in which you will be able to enjoy in a very amusing way, their culture to the sound of the typical music.

Some of the most representative are the Truffle Festival held in January in Sarlat, where this mushroom receives special attention and shows its importance in the gastronomic culture of the Dordogne.

The Festival du Val consists of honouring this natural area by organising hiking trails in the Saint Aistier area, where every step is rewarded with a snack, as well as concerts and exhibitions to get to know the area a little better.

We have also talked about the importance of the medieval period in this department, and therefore, a party around this time could not be missed. Specifically, it is held in August, in the Dropt Valley, where traditional representations of the Middle Ages take place.

Finally, the Black Périgord Music Festival, with over 20 classical music concerts, and the Sarlat Film Festival are two of the key events in October and November respectively.